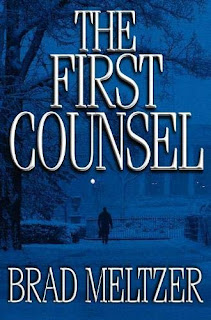 Steve Taylor-Bryant has given himself the reading challenge of reading every full length novel written by Brad Meltzer. This week he stands before The First Counsel...

A date with the president's daughter draws an ambitious young lawyer into a bewildering web of scandal, extortion and murder in this formulaic but lightning-paced suspense thriller set behind the scenes at the White House. Michael Garrick works for Edgar Simon, counsel to the president, and knows the inside workings of Washington and the precarious image-management duties of the First Family. But he finds himself quickly out of his depth on a date with the volatile First Daughter, Nora Hartson, when the two see Michael's boss in a gay bar. Nora insists on following the married lawyer, and the two witness Simon making a suspicious cash drop. Subsequent events link Michael to the cash and the murder of Caroline Penzler, friend of the First Lady and the lawyer who has the dirt on all the big shots. With his career, a presidential election and perhaps his life at stake, Michael cannot trust anyone, least of all Nora, who is dogged by rumours of drug use, promiscuity and general wildness. She is the only witness to his innocence, but he is intent on protecting her, and the president, from suspicion.

I’ll be honest here; I gave The First Counsel 5 stars on Goodreads. This is not because it is a perfect book for everyone, it has some issues some friends have pointed out, but I really don’t care. Of all Meltzer’s books this is the one that I have the most fun reading. It is a page turner set at a relentless pace from the off, barely slowing down to let you grab your breath, and if you want entertaining thriller writing than honestly look no further. The character of Michael Garrick is relatable in that he isn’t a big shot, he is merely a cog in the wheel, and as a reader its easy to sympathise with him. Yes, he works in the most powerful address in the world, yes, he is dating the daughter of the most powerful man in the world, but Meltzer has made Garrick as normal as you could expect, more Hollywood film star than West Wing operative. The relationship with Nora, whilst highly unlikely as I doubt even at the turn of the century when The First Counsel was published that Nora’s escapades would have been kept from the press/FBI/Secret Service/Internet, is still a fascinating one and the differences between Garrick and Nora make the fledgling relationship very interesting to read. The political ramifications and general machinations of the White House are what you hope they would be rather than how they probably are, but when you accept this as the reality it allows the murder thriller at the heart of the story to really grip you.

Meltzer writes Washington so well, he is incredibly knowledgeable on all aspects of the history, architecture, and conspiracies and when he mixes his political side with his thriller writing side there is really nobody better. The First Counsel pushes the boundaries of reality but only if you let it. If you allow the story to unfold without questioning whether things are possible it is one of the most entertaining reads you’ll have. When you have the pacing and tautness of Meltzer’s narratives its quite amazing that films haven’t been made of his books yet, this one in particular would transpose to the screen magnificently.