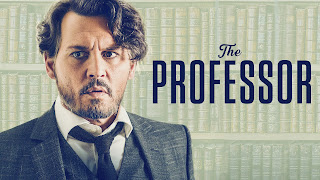 Steve Taylor-Bryant learned a life lesson as he watched The Professor, available on DVD & Digital HD from 24th June courtesy of Signature Entertainment...

When the screening link for Wayne Roberts’ film came to me billed as “A college professor lives his life with reckless abandon after being diagnosed with a terminal illness” I was expecting a comedy, maybe a slightly more sophisticated version of Yes Man or something. It is not. I say this at the start so as you may prepare yourselves should you wish to watch The Professor, and I really think you should, because I was not prepared. I was not prepared for such joy and such sadness in equal measure, and by the end of the film I was so emotionally drained, and in floods of tears. I am not an emotional man and I am not one who cries at films usually, but The Professor got me, and it got me good.

The film plays out in chapters, linear like a conventional novel and with Professor Richard Brown (Johnny Depp) being a professor of English literature this feels right. Starting in the very opening scene we see Richard get his diagnosis and, from that moment on, he changes the way he thinks, the way he acts, the way he teaches quite radically, there is one scene where he takes his full class and dwindles them down to a handful that is both remarkably funny and somewhat admirable. There are moments that I thought would occur because I was expecting a Yes Man type of scenario, and the drink, drugs, sex stuff is amusing, but there is a real reason why these elements are the film are in it at all and that is not to amuse but to teach us, as the audience, that you must live life.

Throughout the entirety of The Professor we are left questioning our philosophy of life. Once Richard has accepted his fate and embarks on his new life you see a change in him that I only wish I could accomplish. He starts to take those little risks that maybe you don’t normally take and yes it may be something as insignificant as a pot brownie, or actually trying to pull a stranger in a bar, but all the risks he is willing to try lead to the education of young adults in a way that they actually learn something about life not just the books they are tasked to study, they learn about themselves, about relationships, about power, about their place in the world, and I just wish I had received some kind of education like that from somebody in my formative years, who knows where I would have ended up. 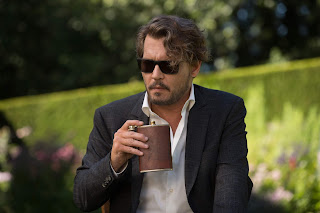 The Professor plays the circle of illness perfectly. From anger to acceptance Richard’s journey is a fascinating one and the way he treats others or is treated by them is no real that you cant help but look at your own life and wonder how many times you have just gone through the motions of something to keep the status quo you have found yourself in. I am a fan of Johnny Depp anyway and always find something in a performance of his that shows what a great actor he is but The Professor, I have to say, I think is his best work by far. The performance of a dying man trying to instil change in the world, in his family and friends, is truly a masterclass and whomever he shares a scene with is better for having done so. Whilst Depp is a standout and worthy of watching the film just for his portrayal, there are certain scenes where other actors get to play their part and Danny Huston as Peter, Richard’s friend and colleague, shares such a strong chemistry with Depp that his time on screen is one of the more genuine and raw moments in a movie packed with genuine and raw. Richard’s wife Veronica is ably played by Rosemarie DeWitt and she is a wonderful foil for Depp early on, but outside of Depp and Huston the biggest compliments should go to Odessa Young as Richard’s daughter Olivia. For an actress so young to take on a role this deep and emotional must be quite a task but throughout the story Young nails every moment with the finesse usually reserved for much more experienced performers and that final scene with her father is the scene that had me weeping uncontrollably, and that was Young’s doing, she is truly magnificent and a star I shall be keeping an eye on.

The Professor is one of the greatest films I have seen. I do not say that lightly, I do not wish to argue with those of you that may not experience this film in the same way as I, I just hope that one of you out there does because it’s a profoundly enriching experience. Congratulations to all involved but especially to Wayne Roberts for writing and directing such an affecting film.