Book - At the Existentialist Café: Freedom, Being, and Apricot Cocktails 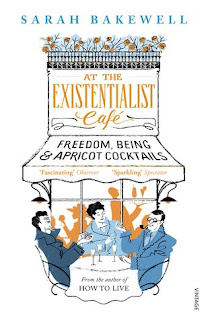 Tony Cross gets a lesson in modern existentialism reading At the Existentialist Café: Freedom, Being, and Apricot Cocktails by Sarah Bakewell…

Paris, near the turn of 1933. Three young friends meet over apricot cocktails at the Bec-de-Gaz bar on the rue Montparnasse. They are Jean-Paul Sartre, Simone de Beauvoir and their friend Raymond Aron, who opens their eyes to a radical new way of thinking. Pointing to his drink, he says, "You can make philosophy out of this cocktail!"

From this moment of inspiration, Sartre will create his own extraordinary philosophy of real, experienced life – of love and desire, of freedom and being, of cafés and waiters, of friendships and revolutionary fervour. It is a philosophy that will enthral Paris and sweep through the world, leaving its mark on post-war liberation movements, from the student uprisings of 1968 to civil rights pioneers.

At the Existentialist Café tells the story of modern existentialism as one of passionate encounters between people, minds and ideas. From the ‘king and queen of existentialism’ – Sartre and de Beauvoir – to their wider circle of friends and adversaries including Albert Camus, Martin Heidegger, Maurice Merleau-Ponty and Iris Murdoch, this book is an enjoyable and original journey through a captivating intellectual movement. Weaving biography and thought, Sarah Bakewell takes us to the heart of a philosophy about life that also changed lives, and that tackled the biggest questions of all: what we are and how we are to live.

Before reading this book my understanding of existentialism was pretty damn superficial. I'd not read anything by any of the key existentialists. Indeed, I knew Simone de Beauvoir had written 'The Second Sex’ but had never read that. I'd read Camus' 'The Stranger’ but didn't know much about him. And Sartre was a name that I knew meant something, but I didn't know what. I did know that Clive James basically made him the villain - indirectly - of his book 'Cultural Amnesia' and was pretty scathing about Sartre as both a human being and a philosopher. Of the many other people mentioned in this book, I knew virtually nothing, apart from if they were mentioned in Monty Python's 'Philosopher's Song.'

Bakewell's book does a fine job of explaining existentialism without it losing its comprehensibility, although some of Husserl & Heidegger's ideas take some time to get one's head around. And I'll admit I'm not sure I'm entirely clear on all of them. It's still a step in the right direction. She also contextualises the philosophy within the life and times of those who wrote it.

Sartre and De Beauvoir are the centre of this book though with other people falling in and out of their orbit as time goes by. Bakewell makes Sartre’s political journey less ugly that Clive James' version and Bakewell's Sartre, although he sounds like hard work, is less of a git than Clive James'. De Beauvoir sounds rather wonderful though.

So, this is a good book to read if you want to find out more about existentialism and those who developed it. I'm not sure I'm ready to take on all the reading required to go deeper. It doesn't seem like the sort of reading that someone like me can do on trains whilst travelling to and from work. It seems to be the sort of reading that needs libraries, silence and concentration, although I've added Camus' other novels, de Beauvoir's 'The Second Sex' and Sartre’s 'Nausea' to the reading list. Plus, I'd like to see two of Sartre’s plays 'No Exit' and most of all I'd really like to see 'Kean'.