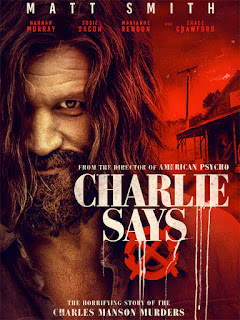 Steve Taylor-Bryant does as he's told and watched Charlie Says, out on digital from 22nd and DVD from 29th July thanks to Signature Entertainment...

Three young women were sentenced to death in the infamous Manson murder case, but when the death penalty was lifted, their sentence became life imprisonment. One young graduate student was sent in to teach them - and through her we witness their transformations as they face the reality of their horrific crimes.

I am not the biggest fan of glorifying murderers, I know the subject matter makes for good sales, but I find it somewhat crass, like I am unintentionally harming the victims by watching a glossy re-enactment of their tragic demise. That being said, when you get the promise of something slightly different the interest gets piqued nonetheless, and different Charlie Says is. There cannot be anyone reading this who doesn’t at least know some of the facts surrounding the infamous Charles Manson and so I don’t consider this article spoiler filled, however just in case you genuinely don’t know about Manson and have only tuned in because Matt Smith gets a mention, then may I suggest you look away now.

It would be easy to make a glorified rehash of the Charles Manson story so when you get to review something that has a twist in its tale its always fun to give it a go, its even more welcome when you find out the film is by the writing and directing team that gave you American Psycho, Guinevere Turner (screenwriter) and Mary Harron (director). And whilst a lot of the film contains Charles Manson its not about him, it’s the story of Patricia Krenwinkle (Sosie Bacon), Leslie Van Houten (Hannah Murray), and Susan Atkins (Marianne Rendon), as they spend time in prison with someone willing to help them and teach them. After the Manson Murders the three women were locked up on death row but when the death penalty was changed to life in prison the governor didn’t want the women mixing in general population and so they were left, for 5 years, in the Special Security Unit used to house death row inmates. A student/teacher, Karlene Faith (Merritt Wever), whose book this film is based upon, that came into the prison and helped the inmates was tasked with spending time with the Manson girls and seeing if she could get some understanding of their state of mind, and see if she could help them come to terms with the atrocities they had caused. Let’s be very clear here – these three women carried out heinous crimes and deserve to be locked away from society and for not one second do I advocate for their releases (those still alive or well enough) BUT and it is a huge BUT, what this film does really well is open the debate as to how much criminal and how much victim the Manson girls were. History has long confined them to the dark annals of mass murderers but as we discover as our audience surrogate Karlene gets to know the girls is that its not as clear as you may think that Patricia, Leslie and Susan were as complicit as first believed.

This is what the film does extremely well, it gives you what I have taken at face value as an honest appraisal of events as told by the girls to Karlene, and along the way Karlene tries to process on behalf of the audience what part the girls played, and what influence Manson had over them and trust me it is a fascinating watch.

Yes, Manson plays a large part in the film with the events and timeline unfurling via flashbacks, and Matt Smith is highly believable as Manson. He has the charm and twinkle in his eye that sucks an impressionable mind in and shows a ruthless edge that can spit them back out. This is not Hollywood Manson, this is not a glorified God, this is Matt Smith playing a warped psychopathic bully that abuses and brainwashes those weaker than himself into doing his bidding. He psychologically damages this young people, he breaks them down right before your eyes before offering himself up as their saviour, and when the unspeakable must be done he hides away and keeps his hands clean, and Smith is most convincing throughout, laying an excellent foundation for Wever, Bacon, and Murray in particular to build from in the jail scenes. The entire film is uncomfortable, makes you question what you would do in those extreme circumstances, and it does not sugar coat the events that led to the incarceration of the girls.

Harron and Turner have turned a fascinating non-fiction book into a glorious, yet sickening look at a very dark part of human history but at no point did I feel that they over-sensationalised things, I didn’t think it was in any way exploitative, and despite how wonderful Smith was in the role of Manson he was not the focal point, he was the plot device that allowed the women to have their story told. Its not often a true-life film about famous murders is anything more than a glossy docufilm but, with Charlie Says, Harron and Turner have made a great job at telling a unique part of a wider story and, whilst the film is hard to stomach in places, it is a marvellous feat of film-making.