Audio - Doctor Who: The Legacy of Time 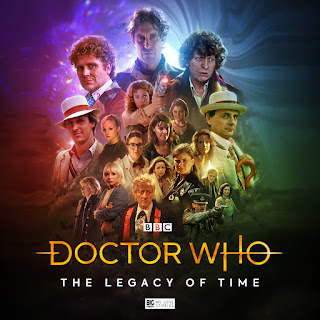 Six hour-long stories from Big Finish see characters from the entire history of Doctor Who crossing paths – some for the very first time – Classic and New Series Doctor Who will collide in Doctor Who: Legacy of Time...

Time is collapsing. Incidents of chaos and devastation are appearing throughout the lives of one Time Lord and his many friends – all fallout from one terrible disaster. From Earth’s past and present to timeless alien worlds, from the cloisters of Gallifrey to the Vortex itself... The Doctor must save universal history – and he needs all the help he can get.

Two of the universe’s most eminent archaeologists will meet for the first time, Professors Bernice Summerfield and River Song… but who knows the Doctor better? There’s a crash collision between the Counter-Measures team, the Seventh Doctor and Ace; Kate Stewart and Jo Jones travel back in time to the UNIT era of the 1970s (or was it 1980s?) and cross paths with the Third Doctor; the Fifth Doctor meets his future daughter Jenny; Charley and the Sixth Doctor have huge crimes to solve with DI Patricia Menzies; and the Fourth Doctor, Leela and Romana head back to Gallifrey to encounter... well, that would be telling.

Executive producer, and Big Finish creative director, Nicholas Briggs, told us about this exciting new release: “The Legacy of Time will probably go down in Big Finish history as our biggest, most exciting production ever! Celebrating 20 years of Doctor Who at Big Finish, it expertly pulls together all the strands from our many and varied Doctor Who ranges.

“This is down to the brilliance of script editor Matt Fitton and producer David Richardson. They epitomise the creative strength, organisational expertise and leadership of the company. Quite simply, this is going to blow people’s minds! It’s got everything!”

Producer David Richardson adds: “We announced The Legacy of Time just months ago but actually work started on it years ago. I remember, back in the mists of time, approaching Nick and Jason with a proposal for Big Finish’s 20th anniversary Doctor Who story – a six hour epic, starring six Doctors, all based around a central conceit which is at the heart of what you’ll hear.

“The Legacy of Time is a celebration in every way, and there might just be the odd surprise and punch the air moment in there.”

Chairman and executive producer of Big Finish, Jason Haigh-Ellery said: “In July 1999 we released The Sirens of Time. In July 2019 we're releasing The Legacy of Time. Those two decades have been so fulfilling for us at Big Finish - a chance to work with so many great and talented actors, writers, productions crews and all of our friends at the BBC. This is a celebration of it all, with lots of surprise returns and references. Think of it as one massive Doctor Who party - and everyone is invited…”

Or you can get it in a bundle with the Doctor Who 50th anniversary special release, The Light at the End Limited Edition, at £65 on download or £75 on CD.