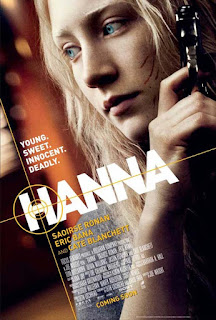 Some actors' work guarantees a box office hit, winning awards and critical acclaim, with films that everyone has seen. Everyone, apart from Susan Omand. So we set her homework to catch up. This month it's Hanna and Saoirse Ronan...

“I just missed your heart”

Way back at the start of the year, when this list was compiled, the name Saoirse Ronan was everywhere because she was co-starring with Margot Robbie in the, by me, studiously avoided biopic Mary Queen of Scots and, I am sorry to admit, I had made an assumption. I assumed that Ronan would be as bad an actress as Robbie is because I thought of them as the same “type”– beautiful, yes certainly, ethereally so in Ronan’s case, but talented? Let’s just say I’ve watched a fair few films that Margot Robbie has been in that have been, diplomatically, style over substance and she has yet to prove herself in my eyes as a heavyweight of the silver screen.

But in Ronan’s case, that’s where this list comes in. You see, I hadn’t actually seen anything she had been in when I classified her in the same category as Ms Robbie, so our great and glorious bossman Steve set out to prove that my assumption as to her ability was a wrong assumption, by making me watch the 2011 film Hanna.

As we all know, Steve is always right. And, dammit, he is again.

What an absolute stormer of a film Hanna is and what an incredible star turn by Ronan who, at the time, was only 16, the same age as her character was in the film. If you don’t know the story, as I didn’t, the general gist is that Hanna has been brought up by her father (Eric Bana) in the wilds of the great Scandinavian forests near the Arctic circle. He has taught her to live and thrive in the extreme environment, trained her senses and intuition, honed her hunting and fighting skills and educated her in many languages and a wide general knowledge. There comes a point in her training where her father deems her to be “ready” and the literal flick of a switch sets a chain of events into action that will lead to a dual stranded chase across the world. Because Hanna is different, her “father” is a rogue agent who saved her from being terminated at a government research facility when she was a baby, and there are people in the CIA, headed up by the defunct research project leader Marissa Wiegler (the ever capable Cate Blanchett), who want to find and kill them both. The hunt will only stop when one side or the other is dead.

The first thing I must say is that the cinematography is absolutely stunning. From the vast monochrome forests of the arctic to the pink tundra of Morocco to the gritty neon psychedelia of Berlin it is such an artistic, almost dreamlike, film to look at. But, stylish and beautiful though it was, this is not a style over substance film – there is a lot of substance! The story was fantastic, with bags of action, bloody violence and great suspense throughout the cat and mouse chases. Blanchett was perfect in the role of Wiegler, balancing CIA professionalism with the “at all costs” single-mindedness of her objective but still showing a human side of fear and vulnerability when the cracks started to show. By contrast, the always wonderful Tom Hollander made a superbly creepy psychotic main henchman, with a lightness of touch and humour that made the violence all the more shocking and I would love to see him as a Bond villain or somesuch after that performance. If anyone was a letdown in the film it was Eric Bana who just played, well, Eric Bana. His fight scene in the underground station was wonderful to watch but other than that you could have substituted in any number of “action hero” actors to the same role and it wouldn’t have made much difference. However, I don’t think that was necessarily Bana’s fault because he was competing for screentime with very strong co-stars and just got a bit sidelined.

However, this article is meant to be about Saoirse Ronan and my word did she impress. With most very young actors, you get the “look at me acting” type of acting that comes straight from drama school, but not here. Her acting was, for the most part, extremely understated and yet incredibly nuanced and versatile, showing a level of competence far beyond her years. No, competence really isn’t the right word, there was much more than technical skill involved. She could go from the sublime blank disconnect that the character would obviously have from years of almost brainwash levels of training to the confusion when faced with the cacophony of noise in Morocco to a real sweetness when talking to her friend. This level of maturity, yes, comes from her having almost a decade of acting roles under her belt prior to taking on the role of Hanna but there is something more, something intangible, a true star quality that, now that she has made the transition into the big leagues of Hollywood, I really hope she gets the chance to carry on developing and not get pigeon-holed, by idiots like me, into doing style over substance films.

So yes, this time, you can call me educated. I will be much more circumspect in my blasé opinion of Saoirse Ronan in future and will definitely seek out more of her work to watch. Just maybe not that one with Margot Robbie in.