Book - The Fire Next Time 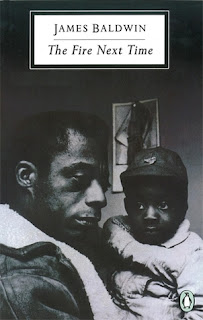 Tony Cross reads The Fire Next Time by James Baldwin...

The landmark work on race in America from James Baldwin, whose life and words are immortalized in the Oscar-nominated film I Am Not Your Negro

'We, the black and the white, deeply need each other here if we are really to become a nation'

James Baldwin's impassioned plea to 'end the racial nightmare' in America was a bestseller when it appeared in 1963, galvanising a nation and giving voice to the emerging civil rights movement. Told in the form of two intensely personal 'letters', The Fire Next Time is at once a powerful evocation of Baldwin's early life in Harlem and an excoriating condemnation of the terrible legacy of racial injustice.

This short book is made up of two sections. The first, My Dungeon Shook: A Letter to My Nephew on the One Hundredth Anniversary of the Emancipation' is exactly what it says it is. It lays out Baldwin's hopes & fears for his nephew (and through him African Americans in general.)

The second, much longer, section is 'Down at the Cross: Letter from a Region in my Mind'. This is a broader text but on a similar theme to the earlier letter. He ranges over history and religion & points out the hypocrisy of white Christianity - "When the white man came to Africa, the white man had the Bible and the African had the land..."

There's long biographical section where he battles with himself and his religion will not be unfamiliar to anyone who has read 'Go Tell It On The Mountain'. It is the same story.

He tells the story of his dinner with Elijah Mohammad, the founder of The Nation of Islam. He does an excellent job of explaining the appeal of The Nation of Islam - "This is the message that has spread...to a people from whom everything has been taken away, including, most crucially, their sense of their own worth. People cannot live without this sense.; they will do anything whatever to regain it."

Baldwin is also rather scathing about integration because it is usually built on black people accepting a white man's values - "It is the Negro, of course, who is presumed to have become equal - an achievement that not only proves the comforting fact that perseverance has no colour but also overwhelming corroborates the white man's sense of his own value."

Published in 1963, a lot has changed or has it? Recent history seems to show that Baldwin was right when he said that a change in the situation of Black Americans was never going to come - "...without the most radical and far-reaching changes in the American political and social structure." It might have looked like those changes had started to take seed but recent history - and the rise of the alt-right - suggests that a number of those changes were less than secure. That there were large numbers of white people who were just waiting for the opportunity to undo what progress had been made.

And as he says, "The glorification of one race and the consequent debasement of another - or others - always has been and always will be a recipe for murder."

We have, I think, reached a turning point. We either move forward as the human race or we are going to move backwards to a world we thought had disappeared. Now, I'm a white European. I have no experience of what being black in America is like. I've no idea how African-Americans see James Baldwin and his ideas in the modern world, but he seems to have a cold-blooded realistic view of what is wrong.

So, reading this book gives you a lot of food for thought and as we reach what I fear is the point of no return let me end with this quote:

"The subtle and deadly change of heart that might occur in you would be involved with the realization that civilization is not destroyed by wicked people; it is not necessary that people be wicked but only that they be spineless."