Book - The Triumph of the Spider Monkey 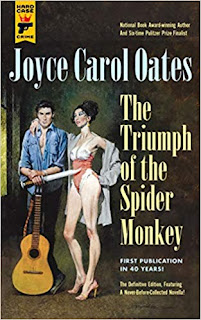 The Triumph of the Spider Monkey explores the fractured mind of a brutal killer as he stands trial for his crimes. Bobby Gotteson, abandoned as a baby in a bus station locker, shuttled from one abusive foster home and detention centre to another, finally arrives in Hollywood, where his hunger to succeed as a musician is over-matched by his seething rage, his paranoid delusions, and his capacity for acts of shocking violence. The novel is an eloquent, terrifying, heartbreaking exploration of madness.

This definitive edition for the first time ever will pair The Triumph of the Spider Monkey with a never-before-collected companion novella by Oates entitled Love, Careless Love, unseen since its sole publication in a literary journal nearly half a century ago, which examines the impact of Gotteson’s acts on a woman who survived them, as seen through the eyes of another troubled young man, this one hired by a private detective to surveil her.

One of the most acclaimed authors of the past century, Joyce Carol Oates has received numerous awards including the National Book Award and has six times been named a finalist for the Pulitzer Prize.

“Joyce Carol Oates is a literary giant and it is a profound honour to publish her work,” said Charles Ardai, founder and editor of Hard Case Crime. “We are especially thrilled to have unearthed a true lost Oates work that even her most ardent fans have not read, to bring a new dimension to one of her most unforgettable stories.”