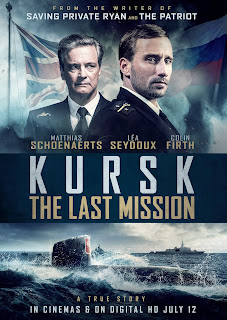 I am not a fan of military based films generally; they just aren’t my cup of tea. Based too much in heroics and explosions, even the true stories tend to be bastardised towards a Hollywood palate so when Kursk: The Last Mission was given to me to review I’ll be honest and state right here I wasn’t expecting to like it. I was wrong. I was very wrong because, you see, Kursk: The Last Mission isn’t a heroic film, it’s a story of Cold War suspicions, of the Russian Navy’s hubris, of old enemies that pretend to be friends but still don’t trust one another, whilst 71 children will never see their father again. Kursk: The Last Mission is an anger inducing look at modern history, told very well.

For those not familiar with the story of the Kursk submarine it is basically this, an ageing Russian Navy in 2000 set about showing they were still powerful with some fleet war games in the Bering Sea. Their fleet though was depleted, old, not fit for service, and woefully underfunded. The Kursk nuclear submarine had an explosion on-board when unsustainable weapons reacted, killing most of the crew, and those that survived the explosion were trapped in one part of a submarine now trapped at the bottom of the ocean. A rescue mission was undertaken but the Russian rescue fleet was just not equipped to cope anymore and despite, private and public offers to help from their international allies, Russia refused to let anyone in until it was too late.

The idea that a modern military could treat their personnel so woefully shouldn’t shock and anger me anymore, I am the son of an ex-serviceman, but I still react to tragic and avoidable death with the contempt it deserves. Trying to make the story of the Kursk, with as much balance as director Thomas Vinterberg and writers Robert Rodat (screenplay) and Robert Moore (book “A Time to Die”) managed to achieve, is a small miracle. Putting my anger aside and looking at the film with the open mind of a critic I have to say how impressed I am with everyone and everything. The look of the submarine, the lighting, the claustrophobic feel of the film is something to marvel at, especially in the underwater scenes within the submarine as you as a viewer are holding your breath, it is quite the immersive experience. The film is chock full of tension, emotive moments, stubbornness, and terrifying moments of survival instinct.

How close to the exact truth Kursk: The Last Mission is I do not know but it hits every beat of information I was familiar with so apart from, I would guess, some artistic licence with the crew in the sub, the rest is pretty spot on. Matthias Schoenaerts as Mikhail holds the underwater story together almost single handedly, it is an epic performance of an extreme situation and he shows what an extraordinary talent he truly is in the film. Grounding the dry land in some reality is Lea Seydoux as Mikhail’s pregnant wife Tanya and, having seen my mother's reactions and emotions during extreme times, I can tell you this stunning portrayal by Seydoux is haunting for some of us. Add in Max von Sydow and Colin Firth for some military gravitas and Kursk: The Last Mission changes from a brave idea to an impeccably executed piece of film that will drag you through the ringer.

There is a quote from Admiral Vyacheslav towards the end of the film, “to do the impossible with the inadequate.” That quote sums up the horrific nature of reality, a reality which doesn’t immediately spring to mind as the subject matter great films are made of. However Vinterberg, the writers, the cast and crew managed to take that depressing reality and craft a very fine and dramatic piece of theatre that teaches us a little about human frailties, about military incompetence, but also highlights family and the need to survive. Whilst the reality is blatantly not anyone’s finest hour, Kursk: The Last Mission is a compelling film that handles a difficult moment in modern history with aplomb.