Book - Lord of the Flies 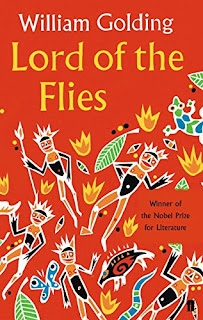 They say you learn something new every day. Thanks to our resident teacher, Mr Ames, you can tick off today's lesson and rediscover a classic book as he discusses Lord of the Flies (with spoilers)...


By trade, I am a high school English and Film teacher and an adjunct college professor. I love the world of literature and especially the way we can look into a written work and really explore the structure and symbolism of each piece, finding beauty and truth in every line. Literature is a wonder in that there can be multiple interpretations for a work and yet, we can usually still arrive at a unified idea of what universal truth the author is trying to portray. I had been talking with my colleagues at The DreamCage and we thought it would be fun to have a little teacher’s corner where I can discuss whatever work I am reading with my students. I will focus on one major aspect of the work and then discuss what it means as a whole, to the work, and to humanity. Great literature, at its core, usually discusses one thing: the Human question—what human truth is being expressed in the work, what theme has the author developed over hundreds of pages, what idea did the writer NEED to express to the reader? This corner will be a place where we can discuss these things. If you want to join in, leave a comment requesting a work and I’ll see what I can do. I am going to try and keep this centered on famous works of literature (novels, short stories, poetry) so try to keep your ideas in that realm. I will warn you that spoilers will abound so if you haven’t read the work we are discussing, you may want to wait until after. Maybe we will establish a lovely little community to help us continue the #savetheculture movement or, maybe, you will learn something yourself. Either way, I look forward to writing these articles.

Last week in my freshman advanced class, we finished reading William Golding’s brilliant 1954 novel Lord of the Flies. Most of the class was spent pouring over the allegory that Golding presents. First of all, let’s approach the human question of the work: humanity is inherently violent and without society and civilization, we will eventually devolve into savages. The book details the events of what happens after a group of British Schoolboys crash-land on an uninhabited island and try to establish society with disastrous results. Golding wrote this work after experiencing the atrocities of World War II. Today, I think we will look at the use of boys and the allegory Golding created.

In this novel, Golding creates a microcosm (a small community or group which represents a larger group) by using a group of British Schoolboys to represent humanity. Each character represents a different aspect of humanity and as the story unfolds, we are treated to a front-row seat as these differences in personality clash and flare.

Ralph, the elected leader of the party represents leadership and moral strength. He becomes the elected chief of the island in the beginning and we are treated to the story mostly from a third person limited perspective focusing on Ralph.

Jack, the foil to Ralph, is the aggressive character who represents the savage instincts of man. He is the cause of the divide between the boys on the island and the instigator of most of the violence.

Piggy, the fat and unpopular boy, represents logic and intellect. While the other boys are strong and virile, it is Piggy’s mind which his real strength.

Roger, the strongest and most aggressive of the older boys, represents pure violence. He is shown throughout the book to be violent and actually results in the first completely voluntary murder on the island.

These personalities all work together in the beginning, as they establish a community where some hunt, others help to keep the signal fire burning, and still others help to build shelters. As with most things that seem perfect, this construct does not last long. The ones who are tasked with building shelters abandon their posts and become lazy layabouts while the hunters are away all day and come back empty handed. Even those who were tasked with keeping the fire burning lose track of their job and miss the chance to signal a passing ship. The boys side originally with Ralph as he is the first to bring them together and seems to be the oldest and strongest of them. He speaks with logic and reason and it is appealing to all at first but as the months pass, the boys begin to defect and eventually Jack faces off with Ralph and starts his own group where, in the end, most of the boys end up. IN the end, the boys burn half of the island down, kill three children (either through ignorance, carelessness, or just plain murder) and are only under control again when a British soldier sees a fire and lands to investigate.

One major aspect of the allegory is the relationship between leadership and the masses. Ralph is initially the obvious choice for leader because he is older, stronger, and much more pragmatic, but once the littluns are treated to meat (caught by Jack) and experience fear in the shape of a beastie (something unseen that frightens most of the boys), they begin to follow that fear and it leads them to Jack’s side because he can “protect” them from the monster. In these exchanges between Jack and Ralph, we can see the way political parties argue and work to manipulate their audiences. Ralph continuously tries to talk to the boys logically, using reason to hopefully alleviate their fears and to continue to hope for rescue. Meanwhile, Jack’s priorities change as he becomes driven with the passion to hunt. He begins to talk about the beast as though it was real, even though they know it isn’t, and in doing so, he plays on the littluns fear that they are in danger. In doing so, they go to his side because he can protect them from harm.

There are multiple symbols which also appear in the book: Piggy’s glasses represent science and technology (they are used to start the fire), the signal fire (which represents the hope of rescue), the clothes and facepaint (which represent the ties to civilization, the Pig’s head (which represents the Devil and evil), and of course the Conch shell (which represents community and togetherness). All of these symbols are used to help propel the allegory forward. As the adherence to the Signal Fire dissipates, the boys are losing their want or need to be rescued and as they disregard their clothes and begin to pain their faces, they sever their ties to civilized life. The conch, which once brought them together, becomes faded and white, losing its power. Eventually, it is shattered and their community is lost completely.

Arguably the most powerful scene in the book revolves around Simon and his death. Many times throughout the book Simon goes into the woods and communes with nature in a very Christ-like way. He is sensitive and smart and the most logical of all the group. He even has moments of prophecy such as when he tells Ralph cryptically that Ralph will make it home (alluding heavily to the fact that Simon will not). He even says once, as the boys are panicking about the beast, that maybe the beast is them, inside of them, all of them. The telling scene comes when he goes into the woods and has an encounter with the Lord of the Flies (the pig’s head). Simon hallucinates a conversation where the head tells him that the boys are going to have fun and Simon had better not stand in the way of that. He faints and as he comes to, he climbs the mountain on the island to see what the beast really is (two boys and then Ralph and Jack went up to see the beast at night and thought they saw a monster). What he discovers is a dead parachute soldier. He runs to tell the boys what he has discovered in hopes that it will help to stop the fighting but as he emerges from the woods, the boys (who are in a frenzy of fear and excitement because of a burgeoning storm) attack him, mistaking him for the beast. They stab him repeatedly, killing him, and the ocean takes his body out to see.

As I stated before, Simon is an imperfect Christ figure because Christ’s death resulted in salvation whereas Simon’s death plunges the island into chaos. With kindness destroyed, Jack’s group steals Piggy’s glasses, hijacking technology. When Ralph and Piggy approach the group to get them back, Roger drops a boulder on Piggy, murdering him and killing intellect, which sends the island headlong into a murderous rampage. The novel ends with Ralph fleeing from the group of boys who have planned to kill him and put his head on a pike. It is only stopped when they are once again presented with society in the shape of an adult. The book’s last scene contains all of the boys crying while the soldier looks uncomfortably at his own war ship, raising a wonderful question about war and whether what adults are doing is any different than the savagery of the children.

Using boys instead of girls was a brilliant choice on Golding’s part, as boys are naturally more vicious and violent than girls (although teaching in a high school has really made me question that notion). This book as well as others of Golding’s led to his reception of the Nobel Prize in Literature in 1983 for, “for his novels which, with the perspicuity of realistic narrative art and the diversity and universality of myth, illuminate the human condition in the world of today.” It is an incredibly important novel, bleak and sad and dark, and a perfect treatise on the human condition, especially our penchant for violence. It is one of those works that speaks volumes about the shortcomings of people and our propensity for manipulation and war.