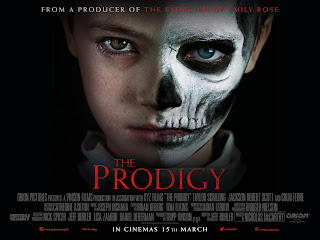 Out on DVD from Monday, Ren Zelen watched The Prodigy...

The latest offering in the ‘creepy kid’ genre, is The Prodigy, directed by Nicholas McCarthy (The Pact, 2012) and written by Jeff Buhler (Midnight Meat Train, 2008).

The story concerns the couple Sarah and John. After trying for several years Sarah (Taylor Schilling) finally becomes pregnant and gives birth to a son they name Miles. However, within the film’s opening minutes it is revealed to the viewer that Miles is unfortunate enough to be born at the exact moment that a deranged serial killer, Edward Scarka (Paul Fauteux,) is cornered and shot dead by police.

In case this juxtaposition doesn’t make the premise clear enough, we also discover that mad killer Scarka had heterochromia (a trait where one eye has a different colour from the other) and guess what – the baby is also born with this anomaly.

Sarah and husband John (Peter Mooney) prove to be doting parents and are delighted that eight-year-old Miles (Jackson Robert Scott) appears to have intelligence and skills far beyond his years. They also discover that he may be developmentally underdeveloped in other (unclear, but probably in social) ways.

Miles may have aptitude well above his age, but he appears to use it with indifference or with little benevolent intent. There’s certainly something a bit ‘off’ with the boy, but Sarah just can’t quite put her finger on what that might be.

From then on the film generally follows the common formula where the viewer is aware that the kid is obviously malevolent, but the adult protagonists are slow to believe that there could be anything so monstrously wrong with their beloved offspring. 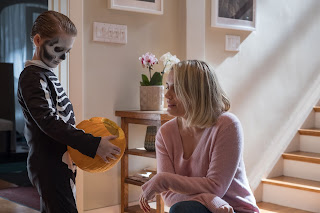 When Miles displays a tendency to mutter foul Hungarian obscenities in his sleep and when crossed, beat up other kids with a pipe wrench, the school psychologist (Paula Boudreau) understandably gets a bit nervous. She calls in Arthur Jacobson (Colm Feore), a rather atypical psychologist with an unusual set of skills, who immediately spots that Miles is clearly a case of reincarnation! (Well phew, not possessed by a demon this time, which makes a change).

Mom Sarah is unsurprisingly sceptical, but after some thought and a little research, she enthusiastically embraces the idea of reincarnation, even if husband John, as is the usual way of these things, remains unconvinced, and persuades her that what Miles needs is an extended stay in a ‘sanatorium’ – more fool he.

Using Miles’s body, Scarka has little trouble in outwitting and dispatching his various adult opponents. He is a cunning manipulator who also has the technical know-how to bug his ‘parents’ bedroom so he can keep tabs on how much they are discovering and what they are going to do about it.

Mother Sarah is finally forced to take matters into her own hands, convinced that she may be able to ‘free’ her child from the psychic clutches of the evil Scarka. But is it already too late?

Writer Buhler and director McCarthy seem to rely on audience familiarity with their scenario and so tend to skim over plot points and details that are introduced but then never developed or explained. Their premise touches on themes of reincarnation and the transmigration of souls but gives the viewer little to grapple with except who will triumph in the end.

The script reveals too much too soon - a missed opportunity to build sufficient tension and engage with the characters. The Prodigy does deliver some effective chills and scares, but they are not quite enough to conceal the vagueness of the central premise and a flimsy storyline.

What might elevate The Prodigy from a mediocre horror is a decent performance from Taylor Schilling as Sarah - conflicted, vulnerable and distraught, and a truly creepy and credible turn from young Jackson Robert Scott. As Miles, Scott displays the uncanny ability to turn on a dime from a scared little boy who doesn’t understand what is happening to him, to adopting the demeanour and facial grimaces of a ruthless and manipulative adult killer. He provides most of the truly unsettling moments and proves to be the real prodigy of the film.