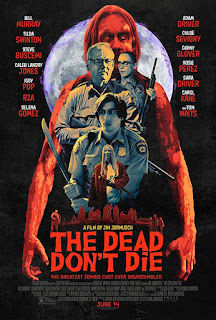 "The road to survival could be a dead end" says one of the films taglines, so did Ruairi B survive his viewing of The Dead Don’t Die...

Jim Jarmusch, the acclaimed director of films like Mystery Train and Stranger than Paradise, seems to have something of a vendetta against his audience (especially the academics) in his most recent feature, the aptly titled The Dead Don’t Die.

In prior interviews, Jarmusch pitched the film as “a ridiculous, stupid film with actors I love”, and here he presents a classic Night of the Living Dead-esque story with deadpan dialogue and “just about anything [he] wanted to put in”. He goes on to say that, when he wrote the script in the spring of 2017, “it became something else”. I feel this is putting it mildly.

The Dead Don’t Die boasts a well-known cast, primarily focusing on Bill Murray and Adam Driver as Chief Cliff Robertson and Officer Ronnie Peterson respectively, who both play mild-mannered police officers who have the task of patrolling Centerville, a nondescript American small-town (and a reference to Frank Zappa’s 200 Motels), seemingly crime-free except for a strange homeless man in the woods (Tom Waits), whose minor misdemeanours Chief Robertson turns a blind eye to.

After news reports of the earth’s axis tilting due to “polar fracking” (an unsubtle reference to climate change), the dead begin to rise from their graves and attack the living, a fact which Ronnie Peterson cottons on to and states with deadpan confidence after viewing the first murders.

Other familiar faces include Tilda Swinton (who plays a katana-wielding Scotswoman, as you do), Steve Buscemi, Chloe Sevigny and even the aforementioned Tom Waits and Iggy Pop (the latter, of course, playing a zombie), all Jarmusch regulars.

The colourful cast of wacky characters and stereotypes then find themselves in increasingly difficult situations, Dawn of the Dead style. It’s classic, it’s simple, it’s everything you would expect story-wise, but at the same time the deliberately nonsensical script and characters will have you repeating the same line as Officer Peterson: “well, that was unexpected”. 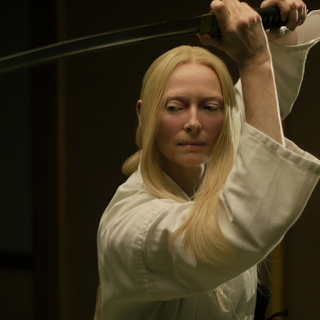 This latest zombie-outing is a supremely difficult film to review or criticise; and I’m grateful that I don’t have the need to give this film a score, as I found it nearly impossible to genuinely hold dislike for a film this rooted in irony.

If I had to sum up The Dead Don’t Die, it would be as if a bunch of lethargic film students managed to strike unfathomable luck in finding the best cast they could possibly imagine, and then proceeded to take the absolute piss, because the only thing I can really compare this film to is a low-effort submission by film students which we have to watch whenever there’s a project-screening at university (I’ll elaborate on this comparison later).

It’s hard to pinpoint whether The Dead Don’t Die took the Inland Empire routine of shooting with an unfinished script, filling in the gaps with surreal improvisation, or whether the film really is organised, low-effort screenwriting as a way to hold contempt for, or even borderline troll, Jarmusch’s audience and fans.

For starters, the dialogue’s deadpan, non-pretentious straightforwardness evokes comparisons between the awkward mundanity of Lynch or Lanthimos and the unashamedly childish bluntness of Peter Jackson’s early splatter films (albeit that it is less vulgar) or perhaps even Sam Raimi’s Evil Dead 2 and Army of Darkness.

In terms of the storytelling, ridiculous and inexplicable things happen out of nowhere, especially towards the end of the film, and the actors remain as unbothered as ever, playing into straight-faced comedic timing. This indifference never really grows old in the relatively short 105min running time, but the film’s humour is by no means perfect, with some gags missing the mark.

A fourth-wall breaking moment happens towards the end of the film, which is difficult to elaborate on without spoilers, but explains why one of the characters has been so blunt (even in comparison to the others) throughout the film, uncaringly (but comedically) lopping off the heads of zombies, and suggesting immediately off the bat that zombies were afoot, to the shrugging acceptance of the rest of the cast. I have no problem with breaking the fourth wall, but it’s a moment which broke the flow and felt jarring, and was never expanded upon aside from a couple of lines. It ends up feeling unnecessary.

Furthermore, I was expecting the ending to tie-in with the film’s own awareness, but instead we get some pseudo-political criticism relating to the fact that the zombies are preoccupied with what interested them the most during their lifetime, including fashion, sports, coffee, wi-fi etc. The problem with this is just how dated some of these societal criticisms are. One zombie moans “siri” while looking at his phone, and this veers away from being endearingly bad to just being cringy.

Buscemi’s character is also a by-the-numbers parody of a Trump supporter, sporting a “make America white again” hat and a house full of guns. It’s a tired trope that’s been done many times, and screams of an ageing director attempting to be relevant. 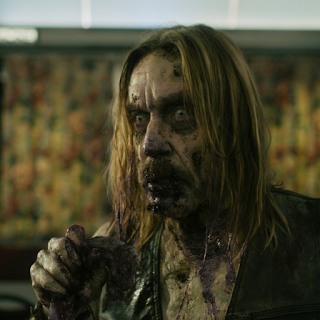 This ties in with the ending, where the film seems to take a U-turn away from its irony and tries to state something political, about everyone being concerned with materialism. As a general societal reflection, this has an adolescent quality to it. I was genuinely unsure about as to whether it was meant to be tongue in cheek or not, and I sincerely hope it’s the former, otherwise it strongly clashes with the rest of the film and trips into pretentiousness.

However, as a criticism of Jarmusch’s audience, in the sense of it poking fun at them for being shallow consumers, and watching and enjoying the film as another zombie-film cash grab, it makes more sense, although the more serious filmgoer might find it rather brazen. I, however, did not. Either way, I’m disappointed with the ending, and I feel this could’ve been handled better.

The technical aspects of the film also reflect this deliberately amateurish feel, with the cinematography and camerawork being extremely by-the-numbers and even student-esque. We’re talking a heavy use of basic tripod statics, along with some strange framing and inconsistent use of close-ups and medium-long shots during conversations, with the medium close-up being the shot to fall back on. In addition, the film uses of a 16:9 screen ratio, a common technique by modern digital filmmaking students, and a more-and-more uncommon occurrence in modern films (which largely use the 21:9 ratio).

This obviously isn’t to say The Dead Don’t Die is a visually inept film; cinematographer Frederick Elmes is well-known, experienced and highly acclaimed in the field, working with Jarmusch beforehand on films like Night on Earth (winning the Independent Spirit Award for Best Cinematography), and winning further awards for his cinematography for Lynch, particularly Wild at Heart and the striking classic Blue Velvet. Considering this background, such a non-pretentious visual style is quite a risk, and I commend it immensely as it truly suits the language and tone of the film.

I stated before that the film is comparable to lethargic, student-based projects, and there’s something I want to stress about this point. Is it a bad thing? In my eyes, no, not at all. There’s far more enjoyment to be taken from these kinds of films than from a very meat-and-potatoes, middling project. I would say The Dead Don’t Die evokes the very same kind of feeling, and it’s a film which allows you to laugh with it and at it. I suspect this truly is a deliberately tacky movie, but there’s something very human and endearing about a project with no pretensions, which simply portrays a bunch of actors and crew having unthinking fun for themselves alone in a film which makes little sense, and the fact that an acclaimed, well-established director is willing to risk making something like this is something I can appreciate.

This means that I really can’t hate The Dead Don’t Die, as this kind of irony strikes a chord with me, and it’s hard to dislike it when clearly that was Jarmusch’s intention all along; to annoy his audience. It’s as mischievous as Lynch and as childish as Bad Taste, and all the better because of it.

Not for the pretentious.