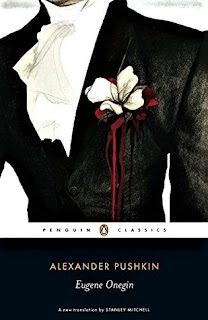 Tony Cross discovers he likes Alexander Pushkin as he reads Stanley Mitchell’s translation of Eugene Onegin: A Novel in Verse…

Tired of the glitter and glamour of St Petersburg society, aristocratic dandy Eugene Onegin retreats to the country estate he has recently inherited. With the arrival of the idealistic young poet Vladimir Lensky he begins an unlikely friendship, as the poet welcomes this urbane addition to his small social circle - and is happy to introduce Onegin to his fiancée, Olga, and her family. But when Olga's sister Tatiana becomes infatuated with Onegin, his cold rejection of her love brings about a tragedy that engulfs them all. Unfolding with dreamlike inevitability and dazzling energy, Pushkin's tragic poem is one of the great works of Russian literature.

In this new translation, Stanley Mitchell captures the cadences and lightness of the original poem, and discusses in his introduction Pushkin's life, writings and politics, as well as previous translations of the work. This edition also contains a chronology and suggested further reading.

I'm not sure what I was expecting from this book, but I enjoyed it. It's much shorter in reality than it was in my head. It's surprisingly funny - and satirically snarky - in parts.

The narrator in particular reminds me - tonally - of Byron's 'Don Juan' (or what I've read of that so far), with the little throwaway comments on the work, the audience's expectations and other writers.

The story of Eugene Onegin, who is doomed to a life of loneliness through his own miscalculations, is a well-known one. The train of events that leads to the duel with Lensky - a duel that could have been stopped at any point - seems particularly sad.

Onegin himself, whilst his fate is tragic, seems to be unable to stop himself from making his mistakes. He's let his ennui become fatal. The best character in this book is Tatyana, who deals with her situation as best as she can, even though her fate too will not be a happy one.

This is a verse translation, which took me a little getting used to. I'm interested to see how a prose translation comes across.

On a practical note the Kindle version of this book has a long introduction and lots of notes at the end so the main text itself only starts about 21% of the way in and finish about at about 63%. No idea why I'm pointing that out but pointing it out I am.