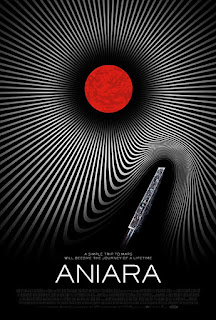 Ren Zelen stared into space and saw the future as she watched Aniara...

‘Aniara: A Revue of Man In Time and Space’ was an epic science fiction poem published in 1956 by Swedish author and Nobel Prize winner Harry Martinson. It tells of a giant spacecraft transporting humans from a dying, ravaged Earth to a new colony on Mars.

The craft suffers an accident which results in it drifting helplessly into deep space, forcing the materialistic, consumerist passengers to deal with the realization that they may never be found or rescued and to confront thoughts about their place in the universe.

This film adaptation of the epic poem is the first feature by Swedish filmmakers Pella Kagerman and Hugo Lilja. The film opens as the passengers are welcomed aboard the enormous spaceship named Aniara. They are promised a delightfully luxurious three-week voyage, complete with spas, shopping malls, bars, nightclubs and gourmet restaurants, before reaching their new home on Mars.

The character we follow is a woman known as the Mimaroben or MR, (Emelie Jonsson). She is in charge of a special area called the Mima. This is a large holo-deck type of room which contains an iridescent ceiling and wide floor space for a group of users to lie down on ‘Mima pillows’. Here they are transported into individual, virtual reality scenes of Earth while it was still verdant and full of natural beauty. Mima creates the scenes from particular memories of each participant.

However, shortly after setting off, some space debris unexpectedly smashes into one of the craft’s reactors causing an imminent meltdown and throwing the ship off course. To save the lives of the crew and passengers, the captain has no choice but to jettison the ship’s nuclear fuel supply.

Now without fuel, the craft and its passengers must drift out of control until—as the captain explains— they happen upon a planet or asteroid with a gravitational field that will allow him to use it to steer them back on course, but, ’this may take up to two years’.

From then the film divides into sections - at Week Three people are beginning to comprehend the full extent of the situation. The ship has onboard algae manufacture so food supply is apparently not a problem even though they will have to give up gourmet dining.

We then jump to ‘Year Three’, already past the captain’s two-year estimation,and we see people making use of the facilities - the bars and nightclubs are packed and the young are living hedonistically. Also, the demand for MR’s Mima facility has grown enormously, so much so that MR asks for assistants to help her run the service.

We come to understand that Mima is itself is a kind of consciousness that can read minds, but is now beginning to despair at the amount of human memories it is having to deal with, especially as some of the less pleasant aspects of the human mind are beginning to creep in. 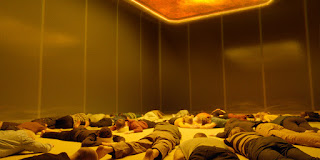 Despite her pleading, the captain refuses MR’s request to give Mima a break and time to recover from the overwhelming workload. He is becoming increasingly authoritarian and overbearing, and it becomes clear that he has been deceiving the passengers and relying on Mima to keep them docile. But it is not long before Mima can take no more human interaction.

The chapters continue in increments of increasing amounts of time as the ship Aniara and its passengers remain drifting in the infinite emptiness of space. Existential dread, emotional isolation, authoritarianism, individualism v. collectivism, the human impulse towards destruction, religion as a panacea for despair and mortality, are some of the themes examined in the epic poem.

Kagerman and Lilja try to tackle these themes, taking a subdued and subtle approach, playing down the melodrama and catastrophe in what is a story of immense narrative scale. We see the constructs of society crumble - filth and debris accumulate in the once pristine hallways, people succumb to despair. The viewer begins to feel as trapped as the occupants of the ship where there is nothing to do but examine how the external decay mirrors spiritual and mental deterioration.

The claustrophobic feeling is aided by Sophie Winqvist’s cinematography while the sound and film editing enhance the film's sombre lyrical quality. The cast give exceptional performances, offering occasional glimpses of happiness in the encroaching melancholy. Emelie Jonsson's in the lead role gives a portrayal which is nuanced and emotional.

The visual effects realistically convey the vastness of the ship yet show its insignificance against the immensity of space. The film asks us to stoically face the void.

Aniara succeeds in conveying the poetry of its source material – it is an impressive debut, exhibiting technical skill, intellectual depth and thoughtful storytelling - an example of how smart, high-concept sci-fi can be achieved. It asks whether humanity is destined to continually repeat the same mistakes and offers a dire warning of what the future might hold if we don't learn, evolve and make a change.