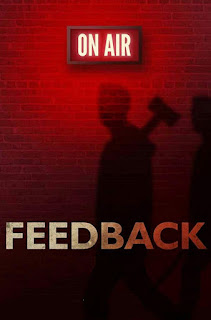 After its run at Frightfest film festival, Steve Taylor-Bryant gives his feedback on Feedback...

This review will be packed with spoilers. I am sorry in advance for this but I cannot get my thoughts across without discussing the twists and turns. If you would rather stay spoiler free, then know that I loved this film and think you should see it. Here is a picture as thanks for opening the article. After the picture though you are reading at your own risk… 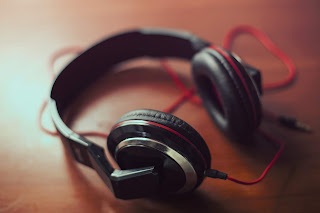 I’m not the world’s biggest fan of horror films anymore. In my youth, I revelled in the extreme violence on my screen but, as I’ve grown older, I’ve found that maybe my constitution has weakened. I prefer films that play on my psychology, fill me with utter dread and fear through unseen actions or dialogue. What Feedback did and did really well was it mixed suitable levels of both scenarios. It gave me huge moments of fear, it built tension within me through the unnerving score, the masks of the perpetrators and Eddie Marsan’s incredible performance, it filled my head with all sorts of horrific imagery without actually perpetrating heinous acts on screen but, as that atmosphere dissipated , as you became calm again, felt safe again, Feedback gave you brief glimpses of extreme torture and violence that put you right back in the zone of uncomfortable fear without overloading your visual sense and making you switch it off. Finding a balance like that, one that appeal to cinema goers that are like I once was and those film fans who are more in keeping with my sensibilities now is an incredible skill and one that writer/director Pedro C. Alonso has mastered here.

The story begins with famous political talk radio host Jarvis Dolan (Eddie Marsan) preparing for his latest show where he wants to tackle the rise of far-right extremism in the United Kingdom’s Brexit society after an attack he had suffered recently. He has a recording of the incident which he knows will be incendiary but his station controller, the slightly slimy Norman Burgess (Anthony Head) is wary of him going on live radio with it. Burgess is also keen to put Jarvis and his estranged friend and former colleague Andrew Wilde (Paul Anderson), a sort of rock star DJ, back together for a show despite Jarvis having reservations. Reluctantly agreeing Jarvis heads off to his studio to start his show, conversing with his producer Anthony (Alexis Rodney), and new girl Claire (Ivana Baquero) along the way. He starts his show with his taunting of those in the Leave camp on Brexit as it appears, he usually would, but when some technical issues leave him with no communication with Anthony in the booth, he begins to realise that something more disturbing is underway. His studio has been overtaken by two masked men hell bent on violence and threaten Jarvis if he doesn’t run his show tonight in the way they want. Andrew is brought into the studio and quickly realises he is not there for a reunion when the questioning gets very personal. The masked men want to know what happened in Andrew’s hotel room to two young girls and a boy after a party at an awards show.

Through force and torture Andrew is forced to admit his involvement in the rape and torture of the girls and boy. As the show goes on Jarvis realises that this is not an attack because of his political standpoint, but a revenge mission by those who feel aggrieved by actions committed in the past by Andrew and who want to know Jarvis’ involvement. Andrew is brutally killed in the studio in front of Jarvis and then we learn that Claire is in fact one of the girls from the party that night and her friend has never been seen again. The youngest of the male aggressors, Wrecker or Alex when the mask comes off (Oliver Coopersmith) is the teenage boy who was tortured by Andrew that night, the older man the father of the missing girl, Hunter or Brennan when unmasked (Richard Brake). This is not going to end with Andrew’s admission and subsequent murder. Jarvis must fight his way out, especially when his own daughter is used as bait to get an admission of guilt from Jarvis and Anthony is brutally slain. This whole episode is being recorded in the booth and transmitted on the airwaves with a ten minute delay so when Jarvis is finally forced into admitting he killed the missing girl and dumped her body in the river he not only has a fight against his aggressors but a fight against time to stop that admission from going out on air. A violent altercation in which he blows up the studio, burning Brennan to death, kills Claire with a pair of scissors, and beating Alex to death with a sledgehammer, concludes you think the events and he stops his admission of guilt from being played to the nation. From the aftermath of the studio attack, nobody but Jarvis and his daughter are any wiser as to Jarvis’ secret and he becomes a national hero with more network power than ever before.

I felt it important in this review to include all the spoilers because this film is very clever, and I cannot express my gratitude to Pedro C. Alonso for writing such a gripping script nor tell you how incredible the performance of Marsan is without you knowing why. The entire set up from Alonso makes you think you are watching a politically based film, taking what is happening in society and on social media to its extremist length. You completely buy into Jarvis as the victim and, when it transpires this is an old fashioned revenge plot the film does not diminish because of it, it is somehow elevated because Marsan has made you care for him. You feel everything Marsan portrays, the fear, the confusion, the terror when his daughter is involved, the connection he tries to build father to father with Brennan. Eddie Marsan has you, you are his friend, his ally, you want him to survive, to you are almost willing him to win. And in one brief moment he fucks you, hard. I often in films I really enjoy find myself rooting for a character, in Feedback my love and empathy for Marsan as Jarvis was as strong as it has ever been for a character, and the massive betrayal I felt after the reveal and for those last moments when Jarvis takes his bow and accepts his godlike stature will stay with me for a long time. It's all well and good writing a great story, but to get this reaction from your audience you need a master performer and Eddie Marsan is truly stunning in this role.

Pedro C. Alonso has crafted a fantastic story that had me from the opening scene and cast his film with the touch of a genius. It is directed mainly in the one or two rooms that make up the radio studio and that level of claustrophobia just adds layers of tension upon tension that was almost unbearable as it was. The score that mixes orchestral and electronic beats plays the role of a character and Sergio Moure the composer should get a standing ovation for his work. The film is lit beautifully, bright and neon in places, dark in others and no shot of this film seems wasted, and cinematographer Ángel Iguácel is another hero in a cast and crew of heroes. Feedback may not be the horror or thriller that a wider audience wants, the jump scares and brutality are there in small doses, but anybody who likes a well-crafted story played out by top drawer performers need to see this film.