Book - Doctor Who and the Target Books of Terror 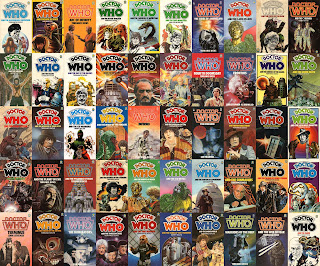 Daniel White pays tribute to the late Terrance Dicks as he leafs back through the Doctor Who Target Books collection...

I grew up with Doctor Who but that didn't always mean watching it. Although my first recollection of watching it 'live' was the Tom Baker story Full Circle and I have watched avidly ever since (excepting the most recent series but that's a whole different article.) Back then I had to read more than watch. It's hard to believe that, when I was a child, there wasn't the access to the entire Who universe like there is today. Even predating UK Gold, the first experience I had of of the Classic era was through the Target book adaptations (a huge number written by the late great Terrance Dicks). In fact, other than reading it, my first audio experience of Genesis of the Daleks was just that, audio. I had a 4 cassette set of the audio only story and I wore it out. The moment when Davros introduces the 'Mark 3 travel machine' sent shivers down my spine. Hearing as The Doctor wrestles with committing genocide to save millions and actually hearing the anguish in his voice was something new to me.

"Do I have the right? Simply touch one wire against the other and that's it. The Daleks cease to exist. Hundreds of millions of people, thousands of generations can live without fear... in peace, and never even know the word "Dalek"."

Up to that point I had imagined the pain, imagined the terror and tension and that was the brilliance of the Target novelisations. I would never have imagined back then that I would own a complete set of Doctor Who stories to watch whenever I please and even the lost or incomplete stories would have a new lease of life thanks to the hard work of the animation teams.

Because of Terrance Dicks close affiliation with the show, his adaptations were flawless in their faithful telling of a story that few in my generation had ever seen. In a lot of ways the novelisations were superior to the actual reality of the visuals. In my mind the corridors didn't all look the same, the sets didn't wobble and the creatures encountered were truly terrifying. A good example can be drawn with the novelisation of 'The Ark In Space' Words are only limited by the imagination of the reader and as Noah's horrific transformation from human to Wirrn is on par with anything David Cronenberg could dream up. Ian Marter describes a man who is completely consumed by an alien force and as his body is mutated you can almost hear the bones crack. Doctor Who and The Ark In Space was one of the first videos I ever purchased and this is what this scene actually looked like! 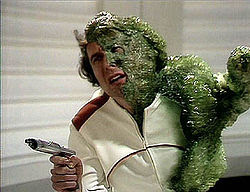 Green painted bubble wrap is what we got! I imagined something much more believable but budget and technological limitations got in the way! Marter does describe the Fourth Doctor as being 'a tall man with a riot of curly hair' possibly one of the best descriptions of Baker's Doctor ever.

Had it not been for the Target books I truly wonder if I would have become the Doctor Who fan that I have. Or at least it wouldn't have been until the more recent DVD releases and my childhood would have been poorer because of their absence. The novelisations were also to be an essential lifeline to Who during the wilderness years of hiatus and I (as most fans did) wondered whether my beloved show would ever return to the TV screen. I read and re read every book so many times and never once lost the sense of mystery that is central to the magic of Doctor Who. Somehow in reading them I became a companion and closer to the Timelord himself than I ever felt just by watching. It's relatively to sit back and watch an episode almost lazily letting it wash over you but to read and engage takes effort and to imagine yourself in the story even more still.

I have read some truly terrible screen novelisations and it is no easy task to transfer the pace and tension from screen to page. Yet the writers of the Target books have lovingly transferred the adventures of The Doctor in a way that (dodgy monsters and wobbly sets aside) faithfully represents what you see on screen. Even the cliff hangers at the end of an episode are so successfully written that you cant help inserting the familiar end credit music before continuing reading. Whilst it's true that the novels varied hugely with regards to story and likeability this doesn't in anyway denigrate the writing itself. It was more to do with the quality of the original TV story and script and in a number of cases the novelisations were far better. Trial of a Timelord's Terror of the Vervoids worked much better on paper than onscreen but that may have something to do with my dislike of Bonnie Langford and her ear piercingly horrendous screaming. It may also be due to the fact that the Vervoids themselves suffered from a terrible design flaw that made them look, well let's say, not exactly scary. This could be said for a lot of the monsters of Classic Who and once again my imagination made them far more imposing. Melkur (the statue in Keeper of Traken) was a towering foe who imposed his will upon the poor peace loving people of Traken. Onscreen, however he was only slightly taller than the Doctor himself and a hefty shove in the right place would have sent him flying. 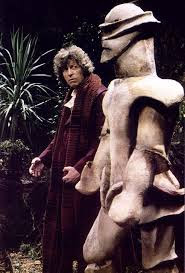 Even though all of the Classic Who stories (the ones that haven't been lost anyway) have now been released on DVD and/or Blu Ray I still re read the Target books. Partly for nostalgia but also because they are fantastic novels in their own right. I am indebted to Terrance Dicks and the other writers for bringing the whole of the Who universe to me and for making me feel like The Doctor had given me my own Tardis key.