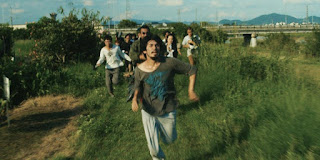 The IMDB description of A Dobugawa Dream simply says, ‘A young man runs away from his past and forms a bond with an old vagrant.’

Which doesn’t even begin to tell the whole story. Because this film, directed by Asato Watanabe, is on the surface a tale as simple as that description lays out. A young man, played by Yuwa Kitagaki, does run away. After a period ‘shut in’ at home. He escapes but ends up on the streets on an unknown Japanese city, or at least unknown to me. Streets that look like mazes. Streets that feel strange and empty.

Until he stumbles across what looks like a funeral procession. A rag-tag mob of drunken men and women are pulling a body through the streets. To his funeral we assume. But then there’s a series of drunken fights, a strange Doctor and Nurse, some blood and the corpse rises. And proceeds to punch our young man in the face.

After that things get weird. The old man played - I think - by Takahiro Fujita* takes the young one under his wing, which involves a lot of drinking, encounters in parks, meetings with an apparently useless Police Officer, more drinking. This time in a bar. And here we meet a couple of women. One, older barmaid, who seems to be the voice of reason. The second a younger, silent barmaid. Who might have once been a dancer and who seems to love the old man? She never speaks. These weird encounters, including a surreal chase sequence, go on for some time. Then the old man dies again.

He was, when alive, a great Shogi player, but there was one man he could never…actually, I’m giving things away. There is a point when you start to feel that this story isn’t just the story of a young man running away from grief. Though it is that. It also starts to feel like something mythological. Things that might have seemed like things start to look like symbols. There’s a sequence towards the end over a game of Shogi that feels like the chess game in ‘The Seventh Seal’ except the old man’s opponent isn’t death, but grief.

And then you start to wonder if this is just a whole mad way of telling a story about the grief and guilt. How we must forget the thing to get over the thing? How we must forgive to be forgiven? It begins to feel like – and forgive my dependence on Western canon but that’s the education I got folks – Virgil/Homer’s tales of Aeneas/Odysseus descending into the Underworld. The odd feeling about the film and the way it ends makes it feel like that. Yes, there’s a dreamlike quality to events. Nothing feels quite normal but that’s what grief might feel like.

Perhaps I’m reading too much into this, but if I am, I don’t care. Sometimes what you get out of a thing is what you get out of a thing regardless of its creators’ intent. Is this a fault? Is one of us to blame? Is it my fault because I went too deep or the director’s fault for not making his intent clear? Is it the job of a director to make his intent clear? Do stories have to be simple and lacking layers to work? Obviously not. So, why am I worrying?

Because my enjoyment of the film is predicated on my reading of its meaning. It’s why as it went on, I found myself being sucked deeper and deeper into its odd world and its collection of the broken. In the end then I like this film, but I fear if people go to see it as a result of this review and hate it, I will somehow be responsible because I misunderstood the film. It might just be the story of a load of drunk people who can’t face up to reality. In which case it is still worth a watch.

I am beginning to think this film has done something to my brain. Or perhaps it is just late and I’ve had a long day.

*It was impossible to find a cast list that I could work out who was playing who. The IMDb pages of the actors didn’t help. Only one of them has a photo. And a couple of them only had one credit and that was ‘A Dobugawa Dream’. So, I apologise to everyone. [updated - the names are now correct - Ed]