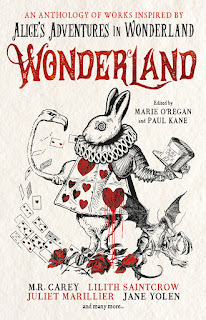 Wonderland, an anthology of stories inspired by Alice's adventures, is published today by Titan Books. Editors Marie O’Regan and Paul Kane have given us their recommendations for authors writing within someone else's literary universe, Playing With Someone Else’s Toys...

Writing in someone else’s universe is a difficult thing to do – it’s also enormous fun, if you get the chance. You get to play with someone else’s toys – but you have to obey the rules and stay within their confines, which can be limiting. When it works, though… How many times have you read a novel, or seen a film or TV show, and thought: I’d love to write for this? When we got the chance to edit Wonderland, we got to play in Alice’s world, and invite some of the best in the genre today to join us – authors like M.R. Carey (The Girl With All the Gifts, The Boy on the Bridge, Fellside, Someone Like Me and comics like The Unwritten, Lucifer, X-Men, to name but a few); L.L. McKinney, author of two novels featuring a re-imagined Alice for the modern world, A Blade So Black, and A Dream So Dark. Then there’s George Mann, a prolific author who’s written his own, original fiction (the Newbury and Hobbes novels The Affinity Bridge, The Osiris Ritual, The Immorality Engine, numerous short stories and novellas), as well as writing in the Dr. Who and Sexton Blake universes. He’s also edited several anthologies himself.

There are other authors writing in tie-in fiction, as it’s called, of course – there’s some amazing work out there. The first person that springs to mind is horror and dark fantasy author Tim Lebbon – with many original novels and collections to his credit (check out The Silence – recently filmed, starring Stanley Tucci – The Hunt, Relics) he also writes in the universes of Alien, Hellboy, Star Wars, Predator. Then there are the film novelisations: Cabin in the Woods, 30 Days of Night, to name but a few… If you check Tim’s work out, you won’t be disappointed.

We’d also recommend Christopher Golden, a US author who’s equally prolific – and often collaborates with Tim. Chris writes comics, novels, short stories, edits anthologies, writes for TV, film… both in his own and others’ universes. From his own work, novels like The Pandora Room, Wildwood Road, The Ferryman, Ararat to writing or co-writing with people like Mike Mignola (Hellboy), Amber Benson, Thomas Liegowski (YA fiction), even the Buffy universe.

Christina Henry is definitely an author to search out. She has written two novels that re-imagine Wonderland, Alice and Red Queen, as well as the upcoming collection of novellas Looking Glass. She has also written in the Peter Pan universe, with her novel Lost Boy, and enters the world of P.T. Barnum with The Mermaid, then there’s The Girl in Red which is a re-imagining of Little Red Riding Hood. On top of this, Christina has written the Black Wings series, which numbers seven novels to date. Although Christina wasn’t able to contribute to Wonderland, she has written us a story for our next anthology, Cursed, due out next year (as has Chris Golden. Ahem.).

Another author well worth checking out is Guy Adams. As well as The World House novels, The Deadbeat series, the Heaven’s Gate trilogy, the YA The Change, he also writes for comics such as 2000 A.D. and Rogue Trooper. And then there’s the audio work: he writes for Big Finish Productions on a regular basis, writing for Dr. Who and Torchwood, as well as adapting H.G. Wells’ The Shape of Things to Come, and an original horror series, Blind Terror.

One of our favourite authors is A.K. Benedict. Known for two genre-crossing crime novels, The Beauty of Murder (involving a time-travelling serial killer) and Jonathan Dark or the Evidence of Ghosts, a supernatural crime tale, A.K. also writes novels and audio dramas in the Dr. Who and Torchwood universes.

Kevin J. Anderson also springs to mind when talking about writing in other people’s universes – an American author of over 140 books, more than 56 of them reaching the bestseller lists, Kevin has written in the Star Wars, X-Files and Dune universes to name but a few, as well as creating his own worlds for fans to enjoy. He also edits anthologies, writes comics and games, and together with his wife – Rebecca Moesta – has set up a publishing company, Wordfire.

Nancy Holder is yet another name to seek out – a New York Times bestselling author, she has written many books in the worlds of Buffy, Angel, Smallville… as well as original fiction in abundance, including the Wicked (with Debbie Vigiuié) and Possessions series. Nancy is another writer who’s collaborated with Christopher Golden in the past, producing several books set in the Buffy universe.

This is just a small selection of authors that are well worth seeking out if you’re interested in reading fiction by people who love to play with someone else’s toys alongside their own. There are many, many others we could name, but that would take much more room than we have here. The one thing all these authors have in common is that sense of being a fan of someone else’s work; and wanting to share in those worlds, bringing their own considerable talents and imaginations to bear on them and the result… the result is often amazing, and never less than entertaining.

With Wonderland, we’ve sampled what it’s like to play in that world – not writing the stories ourselves, but finding authors, similar to the ones we've mentioned, who we were confident would enjoy the experience, and would produce something unique: a story set within the world of Wonderland but recognisably in their own voice, rich in characterisation and atmosphere. We have a very wide range of stories in Wonderland: a Western from Angela Slatter (‘Smoke ’Em If You Got ’Em’); a very dark story from M.R. Carey (‘There Were No Birds To Fly’); George Mann takes an affectionate stroll into Wonderland with ‘About Time’… and stories like Genevieve Cogman’s ‘The White Queen’s Pawn’ and Mark Chadbourn’s ‘Six Impossible Things’ offer quite a dark window into Wonderland. We’ve very much enjoyed the experience of working on this anthology, and believe there’s something for everyone within its pages… Open the book, pick a story (we know a lot of you won’t read right through from start to finish, but pick which to savour first), and step through, into Wonderland.

Thanks again to Marie O’Regan and Paul Kane, and to Titan Books, for allowing us to share this article. Wonderland is out now from Titan Books.