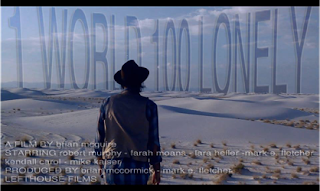 Now available to watch on Amazon Prime Video, a reminder of Steve Taylor-Bryant thoughts on 1 World 100 Lonely from Lefthouse Films from Raindance 2015...

I love UK festival season. For the last three years I've seen some stunning films, shorts, animation and documentary projects. 2014 was a very strong year for both LFF and Raindance and I don't remember not liking anything I saw. My new all time favourite film came out of Raindance as did a superb little film that was all kinds of strange and tickled every part of my sensibilities. That film was Window Licker (reviewed here) and I'm really glad to say the team at Lefthouse Films are back this year with the World Première of 1 World 100 Lonely on September 28th.

A deeply intimate portrait of human relationships and love through the stories of four people as they’re drawn together and pulled apart. In the first storyline, a man from the US and an Iranian woman living in the UK finally meet after an online relationship. In the second, a man discovers that his girlfriend is cheating on him, leading him to spiral into depression while she leads her own journey of self-discovery. Loneliness and desperation for meaningful human contact are big themes in this film, but so is the sweet, joyful optimism of the beginning of something new and, just maybe, beautiful.

Written, edited, shot & directed by Brian McGuire on an Android mobile phone, 1 World 100 Lonely is a completely different film to Window Licker and has a sadness and elegance about it. A series of love stories are the main event here but with superb casting and an almost documentary feel, due to the way it was filmed, it grips your soul and refuses to let go. The cast are also the writers and the film writes itself on screen as they started shooting, add in the mobile phone shakiness and this shouldn't work but it's a stunning insight into how people form relationships and react to their innermost fears about sharing their lives with someone special.

Forget everything you think you know about how a film should be produced as 1 World 100 Lonely throws out the rule book. Brian McGuire has taken bravery in his different approach and raised my opinion of film-makers which was already quite high. I'd be really interested to see what Brian could do with a budget as I think he's one of the special few that could accomplish anything.

If you get the chance to see this film do yourself a favour and go!