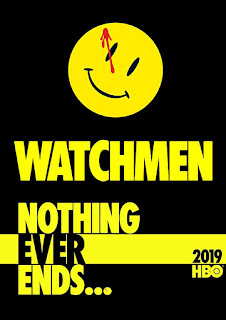 The all-new story for the HBO TV series Watchmen examines how we as a society feel about heroes, most notably people who wear masks and fight crime. Find out more in this behind the scenes featurette with cast and crew ...

Based on the graphic novel of the same name, Watchmen is set in an alternate history where “superheroes” are treated as outlaws. And while the show's creator Damon Lindelof (The Leftovers) plans to embrace the nostalgia of the original groundbreaking graphic novel, co-created and illustrated by Dave Gibbons and published by DC, the series will also attempt to break new ground of its own.

You might want to listen out for the music in this featurette too as Nine Inch Nails musicians Trent Reznor and Atticus Ross (who first worked together as film composers on The Social Network) have created the original music for the series.

Watchmen hits US TV screens on 20th October and appears a day later in the UK.