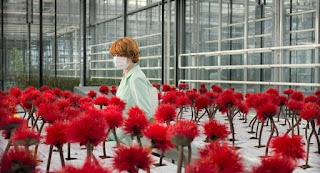 Austrian director Jessica Hausner who made a splash with Lourdes (2009), a mysterious film about miracles, has now made Little Joe, a sci-fi chiller and her first film in English. ‘Chiller’ may be the most apt description as the entire film has a distinctly frosty tone.

Emily Beecham plays Alice, a senior scientist who works for Planthouse Biotechnologies, a corporate plant-breeding laboratory which uses genetic engineering to create new plants which they hope may prove to be profitable.

In a high-tech hothouse nursery Alice and her colleague Chris (Ben Whishaw) have been developing a top-secret strain of a genetically engineered plant whose microbial scent should make people feel happy by encouraging production of oxytocin in their brains.

The oxytocin hormone is particularly significant as it encourages bonding amongst humans, such as the bonding between mother and baby, a connection which makes them feel good. It is sometimes referred to as the ‘love hormone’ but it also has physical and psychological effects, including influencing behaviour and emotion – we are all familiar with the changes that can affect people when they feel themselves to be ‘in love’.

The plant thrives when it is given attention and cared for lovingly. In return it will produce its special scent and make its owner ‘happy’.

Alice is a divorced single mother who lives with her pubescent schoolboy son called Joe (Kit Connor). Although she maintains a façade of humble conformity, Alice is really a workaholic who is very confident in her own professional judgement and abilities.

It transpires that she’s broken a few procedural rules about what she is allowed to do regarding the plant’s genetic engineering and its accelerated development. In fact, she is so confident in her work that she breaks another rule and brings one of the plants home as a present for her son who she tasks with looking after it. They name the plant ‘Little Joe’.

The plant has round flower of fine, red tendrils that stir and open out when given the attention of its human ‘carer’. It then entices them close with its lovely scent. However, when its carer is close, it then releases a smoky puff of pollen.

Bella (Kerry Fox), one of the older, more experienced botanists, has some reservations about the new plant and begins to ask questions. She’s concerned that Alice and Chris have made the plant unable to reproduce naturally. It’s a primary concern of nature to be able to reproduce itself, so how might the plant compensate for its this unnatural state of sterility?

When the plant is found to release copious pollen, masks are worn in the high-tech nursery until its potential allergens are tested, but Bella is first to notice small changes in the behaviour of people once they’ve been exposed. Unfortunately, Bella’s mounting concerns are ignored by her colleagues as being the hysterical reactions of a woman who has recently returned to work after recovering from burn-out and mental breakdown.

The plant is seen as a success and a potential profit bonanza – subjects in preliminary tests with the plants agree that it transforms their moods and makes them happy, but what the scientists choose to overlook is that those close to them are also uneasy with subtle changes in their behaviour. They look and sound the same, but on some level, they are not the same people.

They feel little interest in the outside world or those in it, they are serene and happy and all that really concerns them now is their continuing loyalty to the ‘Little Joe’ plant and to the others with the same purpose. Once they’ve been converted to their new state of placid contentment, they become fiercely protective of it. 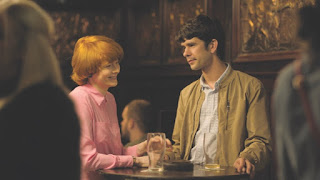 It doesn’t take much of a leap to see that these plants may be a metaphor for society’s increasing dependence on mood-altering drugs and antidepressants. Symbolically speaking, Little Joe’s carers are addicts, and the sinister aspect of the film lies in the fact they want everyone else to join them.

Little Joe is a film about mood and its own mood is one of dispassionate detachment. It calls to mind the journalistic-style of John Wyndham’s science-fiction novels. This ambience is supported by the way the film is shot in a cold, clear, chilly style - the scientists in their pale coats, the high-tech glassy greenhouse, the shining white and pale green shades of the facility itself.

The language also remains distantly polite and superficial, perhaps its simplicity may be put down to a director whose first language isn’t English, but it adds to the oddly dispassionate atmosphere as people fall prey to the numbing satisfaction the plant offers.

Much of the actual unease and suspense is produced by the striking musical score by Teiji Ito and Markus Binder. It’s a cacophony of thumping drums, flutes and discordant industrial wails that soon begin to jangle the nerves.

Director Jessica Hausner elicits restrained performances from an impressive cast of actors, and this fits the mood of the film, as the apprehension and anxiety inherent in her story centres around the subtlest of personality changes.

Emily Beecham’s Alice begins as an amiable if distant mother, dedicated to her work. Disinclined at first, she becomes increasingly troubled, suspecting that her hubris as a scientist may have unleashed a kind of needy, self-serving, vegetal monster.

Little Joe seems to indicate that we may be becoming a society of people keen to avoid the increasing stresses of the world. Desperate for escape, we often seek it by artificial means, and there’s money to be made by giving it to us. We have become addicted to our own well-being, regardless of the cost to ourselves, to those closest to us or to society itself.