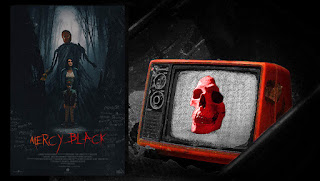 We love Halloween here at The DreamCage and we love the countdown to it even more as, every day in October, David Ames opens a window (well, writes an article) in his Hallow-vent Calendar of horror films. His choice for Day 7 of Hallow-vent is Mercy Black...

Sometimes the things that happen in the real world are far more disturbing than what we can put onto film. Those events often inspire films, such as The Strangers being based on The Manson Family murders. In 2014, two young girls in Wisconsin were found guilty of leading their friend into the woods and stabbing her 19 times in an effort to sacrifice her to Slender Man. Those terrible events were the basis for today’s film: 2019’s Mercy Black.

As a young girl, Marina and her friend Rebecca lure their classmate Lily into the woods and sacrifice her to Mercy Black, a demon that they believe will give them a gift for their effort. Marina’s mother is dying of cancer and she hopes that by going through with the killing, her mother will live. The film jumps fifteen years into the future when Marina is released from psychiatric care and into the custody of her sister. Marina heads back home to meet her nephew, Bryce, and her sister’s boyfriend, Will. She is haunted by the memories of what she has done.

Meanwhile, since Marina’s incarceration, the stories of Mercy Black have gone viral. Marina is not ready for this kind of exposure, and so when Will tries to convince her to go public with her story and make some money, her world begins to implode. At the same time, Bryce begins to obsess over Mercy Black’s existence. Strange happenings begin at the house and Marina begins to wonder if, against everything she has been told and everything she is trying to believe, maybe Mercy Black is real.

I don’t want to give anymore of the plot away, although, if you have seen a horror movie in the past five years, you can already predict basically every move that will happen in this film. It isn’t a bad movie per say, but it is clichéd and stilted. Every scare is an attempt at a jump and most are so terribly choreographed that you see them coming minutes before they show up on screen.

The performances in the movie are all decent. Daniella Pineda plays Marina with a sense of innocence and loss. She is convincing, although she has a strange accent that comes and goes on a whim, which can be distracting. The best performance of the film is Elle LaMont as Alice, Marina’s sister. She steals every scene she is in. Mikes Emmons is good as Bryce, although the “creepy little kid” trope has been done to death. He does a good job with the terrible script he was given.

The biggest detriment to this film is the writing. The story is not only clichéd and full of plot holes, the dialogue is laughable at best. The film looks good, although there is nothing special about the direction or cinematography. It is shot well but it isn’t spectacular.

In the end, this film is okay. It isn’t the worst thing I have ever seen, but it most definitely isn’t the best. It has moments that are great but they are often overshadowed by telegraphed jump scares and hilariously predictable plot points. When I heard about the idea of the film and the connection to the Slender Man Stabbing, I wondered why this was released straight to Netflix without any advanced notice—now I understand why.