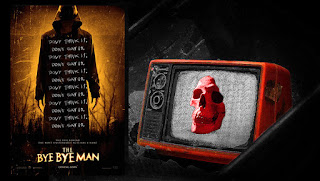 We love Halloween here at The DreamCage and we love the countdown to it even more as, every day in October, David Ames opens a window (well, writes an article) in his Hallow-vent Calendar of horror films. His choice for Day 6 of Hallow-vent is The Bye Bye Man... 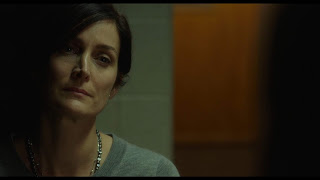 I have been interested in today’s film since I first heard about it back in 2016. I didn’t know much about it, but the imagery and the appearance of the titular character made me want to see it more than anything else. It looked like it could be different, or at least genuinely unsettling. It looked smooth, polished, and well-put-together. Then, things got in the way and I was never able to sit down and watch this film, but this year’s list has finally provided me with that window. Therefore, today, we are going to look at Stacy Title’s The Bye Bye Man.

The movie opens with a wonderfully directed and shot scene based in 1969 where a madman is running door-to-door in a residential suburb of Madison, Wisconsin. In his hands is a twelve-gauge shotgun, of which he is mowing down his friends and neighbors. He keeps shouting “Don’t think it, Don’t say it,” and shouting about not saying the name of something, grilling his victims about who they have told before he shoots them.

Then the film jumps to the present and begins to follow three college students, Eliot, his girlfriend Sasha, and John, his best friend. These three have finally been able to pull together their resources and rent an off campus house that is huge, but perfect for what they want. Immediately there is something slightly off about the residence, from the small attic doors popping open on their own to the sound of a dropped coin here and there. Eliot even finds a coin and when he tries to put it in the drawer of an end table that was found in the house, he instead discovers some incredibly weird writing which just says “Don’t think it, don’t say it” and “the bye bye man.”

The only person who seems to notice these strange happenings is Sasha, and so after a party in the house, she asks her clairvoyant friend, Kim, to bless and cleanse the house. Eliot is the staunch unbeliever but even he is caught somewhat off guard when Kim not only sees things she couldn’t possibly see, but begins to chant the phrase and is visibly scared of the Bye Bye Man.

After the night’s festivities and unsettling events, the group slowly begins to go mad, hallucinating in all sorts of ways. Eliot becomes convinced that Sasha and John are having an affair, Sasha becomes ill, and John becomes violently angry and can’t stop seeing haunting images. As the group slowly descends into madness, Eliot discovers what exactly the spirit is and how it is spreading.

That is all the plot I want to reveal. The first statement I have to make about the film is that I should have continued to wait to watch this one. While the premise was interesting, the film itself fails on multiple accounts. It feels so disjointed and clichéd that it was distracting. The character of the Bye Bye Man initially looks disturbing, but as more of his physical appearance is shown, he looks less like a demon and more like a kid who shops at H&M and wears a Corey Taylor mask. Along with the appearance is the strange addition of a very poorly designed and rendered cgi hellhound (I think).

The main cast does a serviceable job with what I can only guess was a shockingly disappointing and convoluted script. The kids have pretty decent chemistry but a lot of the acting, especially from the two male leads was over the top. Carrie-Anne Moss (of Matrix fame) even makes an appearance as a detective, but she feels stilted and empty, like every other aspect of this film. And don’t even get me started on the rushed, half-assed, thrown-together ending.

Initially, as I sat down to watch, I thought this was going to be just another Blumhouse/Lionsgate style early-20s horror movie in the vein of Slender Man and The Ruins. Sadly, I wasn’t even given that. Instead I was given a movie that pulls clichés from multiple other similar horror movies and forces them together into an incoherent mess that feels less like a movie and more like a hostage negotiation where every element is screaming for help. I was upset because I really wanted to like this but sadly I never had a chance.