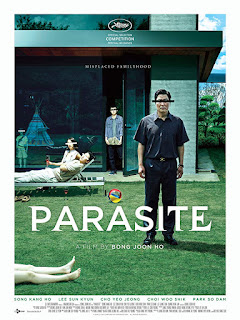 This is my first Joon-ho film and what a highly enjoyable experience it was. The Kim family of four live in a basement apartment. Their only income comes from folding pizza boxes ready to be filled for delivery and several of their boxes are getting rejected by the quality controller who docks their pay accordingly. They’re struggling financially and when they can’t afford their broadband, they try and pirate other neighbours’ networks, but to do so, the two kids stand on the kitchen units, bent double by the ceiling in their quest for connectivity. It’s a metaphor for the family striving to rise above their circumstances and to ascend from the basement. Metaphors are big in the film, the son takes receipt of a large rock, which he describes as a metaphor and keeps trying to place it in its changed context to illuminate the latest event or incident.

A mate of the son suggests he take over an English language tutoring gig he has in a rich house in town. They counterfeit some university credentials and the son lands the gig. Now we move from the cramped conditions around the Kim’s kitchen table, to space, light and angularity, with tracking and mid-shots of Mrs Park in her architect designed manse. The contrast is astounding and pretty quickly you realise this is a film all about class. The ‘parasite’ of the title, is not a single Terence Stamp-like character as in Pasolini’s 1968 film “Theorem”, instead here the entire Kim family insinuate themselves into functions at the Park residence, as art therapist, housekeeper and chauffeur, the latter two vacancies brought about by nefarious means. However, they hide the fact that they are all members of one family. So far so satisfying, in terms of redistribution of social justice, albeit it with an underlying creepiness about the Kims’ underhanded methods.

Then the film moves into another gear altogether. The Parks set out for a camping trip to mark the birthday of their young son. Only Mummy Kim as housekeeper is supposed to mind the fort, but all three of her brood decide to hold a drunken evening in the house. They admire the luxurious space and yet they are arranged like the four sides of a parallelogram around the centerpiece lounge table. Doorbell rings and it’s the former housekeeper begging to be let in, claiming she’s left something behind in the house. That something is her own husband, who has been secretly residing in a subterranean space in the house, unknown by Parks and Kims. Conflict ensues, with comedic slapstick violence, set against the notion that there are people of a class lower even than the Kims, who are live in a basement, whereas hubby here lives even deeper down than that. 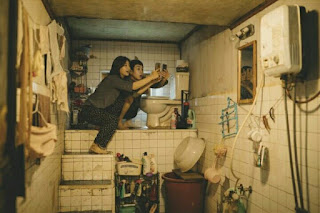 However, due to inclement weather, the Parks have had to abandon the camping and ring ahead to ask for the boy’s favourite supper to be prepared. The Kims have 8 minutes to cook and clear up any trace that they’ve been there uninvited. The party’s detritus is shoved under the lounge’s sofa, along with Pa, son and daughter Kim, who are now in even more reduced physical proximity to one another than ever before. They’re trapped there because Park junior has thrown a curve ball and decided he will camp out in his tepee in the garden in the rain and his worried parents encamp on the lounge sofa to keep an eye on him, with the Kims just beneath the upholstery. Which is fine, until in the first example of proximity Mr and Mrs Park have been forced into together, they get all intimate and jiggy with it.

Eventually the Kims escape and return to their basement flat to find like the rest of the community, that it has been flooded by a mixture of stormwater and sewage from burst pipes. They try and save meagre possessions by again holding them above their heads, as with their phones at the start of the movie. The boy saves his metaphorical stone and we get another shot of humans packed like sardines as they bed down in the temporary refuge for all those flooded out from their homes. I won’t spoil the explosive incident that launches the film again into a whole new atmosphere for its finale, other than to say Tarantino would kill to write a set-piece action scene like that.

The film is a study of class, that there always seems to be others below you in the pecking order and within that schematic, just who is parasiting who? We have the Kims leeching off the Parks financially and being granted access to the beautiful manse, but we also have another family in the subterranean vault doing similar, which threatens their own precariously raised status. But we also have the Parks parasiting and exploiting the Kims. The expression of Mr Kim’s face as he pushes a shopping trolley round a supermarket while Mrs Park plops things into it  is a sight to behold. While in addition to being given 8 minutes to whip up a meal, Mrs Kim is also asked to lay out the tables for the boy’s replacement party for the abandoned camping in the Park’s scenic garden. Mrs Kim looks aghast, we the audience believe it’s because those tables are stored in the vault and she knows what also lies there, but it’s actually a pained look of a woman who has to wrestle with 8 heavy bits of garden furniture all on her own, while Mrs Park saunters around her on her mobile phone like the social butterfly she is. Brilliantly acted by the whole cast, beautifully framed and shot, this was a film that delights with its strange mix of subtlety and confrontation. You know, like the films Quentin Tarantino used to make.