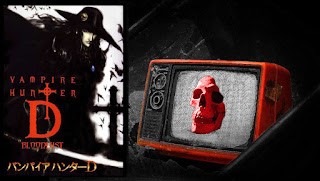 Every day in October, David Ames opens a window (well, writes an article) in his Hallow-vent Calendar of horror films. His choice for Day 26 of Hallow-vent (and a special for our Anime theme day) is Vampire Hunter D: Bloodlust... 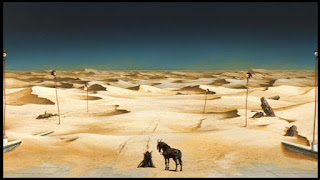 Anyone who has followed my articles, and especially the past Hallow-vent Calendars, is aware of my undying, and irrational, love of vampires. They singularly my favorite creature, and basically my favorite topic just in general. As I mentioned before, sometimes one stumbles across something that is incredible, simply by accident. That was the case when I first discovered the original Vampire Hunter D, an amazing, landmark anime film. I was 14 and knew that I had found something special. Then, three years later, I was wandering around the store when I saw that there was another Vampire Hunter D film in the new releases. I bought it immediately, without even looking into what it was, and I was greeted with what has become my all-time favorite Anime movie: 2000’s Vampire Hunter D: Bloodlust.

D is a dhampir, half vampire-half human, and shunned by both groups. Although he walks alone, he still works as a vampire hunter, being paid by the humans to track and destroy vampires. When Charlotte, the daughter of a very wealthy nobleman, is kidnapped by Baron Meier Link, a vampire nobleman, her father offers a large sum to kill the vampire and bring her back, or kill her humanely if she has been turned.

While no one trusts D, he is exceptionally skilled, and his prowess as a hunter precedes him. At the same time, Charlotte’s brother hires a team of human vampire hunters, the Marcus brothers, who bring their team of skilled warriors, including a fierce young woman named Leila, and a physically weak but spiritually powerful psychic. The film then follows these two groups as they attempt to stop Link from absconding with Charlotte.

While Link flees, and fights when necessary, he has also hired a group of incredible warriors made up of Barborois, a strange race of mutants who are skilled in strange ways. They consist of Caroline, a shapeshifter, Machira, a werewolf, and Benge, a strange harlequin shadow manipulator. The battles between the two groups as well as the hunting parties and Link’s cadre are epic and span most of the film. The story becomes even stranger when it is revealed that Charlotte has left of her own accord, claiming to be in love with Meier. For his part, the Vampire has not turned her, takes the utmost care to keep her safe, and even steps out into the sunlight, nearly dying, in order to save Charlotte from pain.

As the group nears the house of Carmilla, an ancient and powerful vampire who supposedly has a spacecraft which she will use to transport the couple to safety, the groups of hunters converge on the house and are treated to their very own series of horrific visions and manipulations. Only D is powerful enough to see through the guise and attempt to rescue Charlotte, although that need evaporates quickly when he realizes her true intentions, and that Meier is not all he is rumored to be.

This film cannot be praised enough. Every aspect of the movie is rendered perfectly. The art is a perfect blend of hand animation and CGI, something not common in 2000. The story is engrossing but not convoluted, and contains serious undertones of social commentary on everything from love to interracial marriage to racism. On the whole, this film is a must watch.

The character design is spellbinding, especially that of the Barborois and their powers. Each character has a distinctive design and isn’t hindered by the classic anime character makeup. Instead, they are all drawn, not from a template, but to create fully-formed characters. This is also seen in the stellar writing, where each character’s motivations are clear and their arcs all develop both individually and as a group.

If you have never seen a Vampire Hunter D film, you should really pick this up. I know that the original is a classic, but you don’t need to see it to understand this movie, and I truly believe that Bloodlust is the superior work of art. I have used this film as a gateway for so many people who told me that they hated anime, only to be converted after finishing a viewing. Don’t let your distaste for the genre stop you from enjoying this work of art.