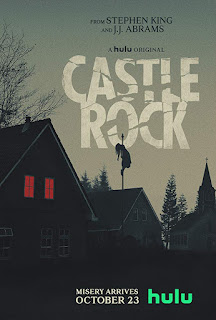 Nate McKenzie headed for King country as he watched the first season of Castle Rock...

You have to be brash to attempt an adaptation of a Stephen King novel for the screen, even if just for television. But you have to be positively touched in the head to have a go at bringing the entire King Universe together for one epic story. The writers of Castle Rock must have white hot bones searing in their closets, because what they did with season one is astounding. Even with piles of tension and anxiety heaped upon the viewer, as well as numerous outright frightening or jaw-dropping moments, the show conjures a feeling that you might not expect: familiarity.

Most of us are trapped here for a reason. Everyone in this town has some sin or regret, some cage of his own making.

For many of the folks living in Castle Rock, the town is more than a pinpoint on a map. It heaves and bows, constricting in the winter then erupting in a plume alongside the spring leaves, loosing a volley of chaos upon its people at random intervals but always at will. All the while, citizens wash the blood from their hands, staining red the snow and running waters alike, and go about their daily chores. They are trapped. They know it. But they’ve given up hope of ever escaping. That feeling pervades the minds of real-life small-town folks just as much as it does the people suffering in Castle Rock.

Throughout the show, King fans will notice hints and nods to classic characters and tropes from the King Universe. Those moments can be exciting (Jackie Torrance?!) Then there are moments where you recognize someone from your own town, someone you see at work or in your own family, or worse, your own mirror. But we brush aside those images with adroit denial like only the hopeless can. 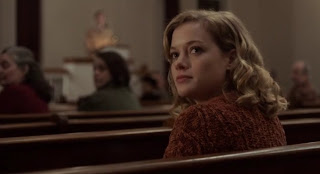 The twists and turns of the story are difficult to piece together at first. It can be like looking through a stained glass window from a church pew, trying to focus your eyes on one bit of light to create the picture of the outside in your mind; then the beam shifts and you lose it. Walking outside after the sermon, you see the day as it is. The last three episodes of Castle Rock had that sort of revelatory vision. All the little creeks and brooks flowed back together into the narrative, exposing the truth of the face hiding behind the multi-colored glass.

“After a while you forget, which side of the bars you're on.”

Some say the finale left us with more questions than answers, but the truth is, there are no relevant questions when malevolent evil is the answer to everything as it is in the town of Castle Rock.