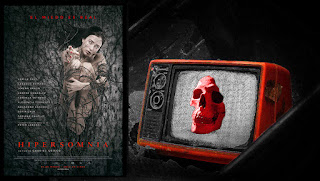 We love Halloween here at The DreamCage and we love the countdown to it even more as, every day in October, David Ames opens a window (well, writes an article) in his Hallow-vent Calendar of horror films. His choice for Day 25 of Hallow-vent is Hypersomnia... 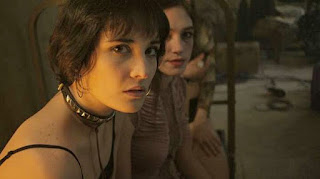 In this world there are very few subjects which make my skin crawl. Today’s movie deals with just such a topic: Human trafficking. The film deals with the brutal and devastating practice of human trafficking in Argentina specifically, and it shows the horrors that these women must face. Today’s film is 2016’s Hypersomnia.

Beautiful young Milena wants to break into the acting world. In searching for her first major role, she auditions with an old, famed director named Frederico. The play she will be starring in deals with the world of human trafficking and so the director wants Milena to be able to portray both fear and sensuality. He sets her up to be taken advantage of by another woman, alluded to be a prostitute, but when Milena can’t go through with it, Frederico offers her one final chance. When she finally loses herself to the woman, she is granted the role.

The next night, as she is reading the script for the play, she blacks out and wakes up in the body of a girl that looks incredibly similar to her. This girl, Laly, is a victim of human trafficking. Together with a large group of women, she is forced to please clients and take care of herself and the others, all while trying to avoid being summoned by The Gardener, a mask and apron wearing John who has a penchant for severe torture.

As Milena appears back in her body, she begins to wonder what is happening. After a few more out of body experiences, and no person believing what she is going through, she begins to wonder whether she is losing her grip on reality, and whether the role is too much for her. Meanwhile, Laly and the other women are trying to find a way to escape, but the Gardener and his mother, the two owners of the operation, will not let that happen.

Melina enlists her boyfriend, convincing him that she is telling the truth by showing him a picture of Laly that was posted in the police station under missing persons. Together they scour the city in hopes of finding the girls and helping free them all.

This film began and I was instantly worried that I was simply watching a cinemax style film, designed to elicit a reaction out of my hormones and not my mind. The blatant nudity and almost forced lesbian sexuality felt like a cheap ploy for views. Sadly, this seems to be the case across the length of the movie. It is an interesting premise but the reveal is not handled well, and as the film progresses, it feels as though they just ran out of money.

The only performance that truly stands out is that of Yamila Saud. She is not only breathtaking to watch, but also has some pretty decent acting chops. Playing two roles, she still manages to create two distinct characters. Literally every other person in the film is a two-dimensional caricature.

Overall, this film was incredibly disappointing. I understand the purpose of the message and it is something that I truly support. Human trafficking needs to stop, and the end of the film shows us some statistics that are heartbreaking. Sadly, these are the only really moving parts of the entire film, and you are left, instead of satisfied, feeling as though you need that hour and a half back. The film deals with the subject in a way that, at points, borders on exploitation, and then devolves into a revenge thriller…kind of?