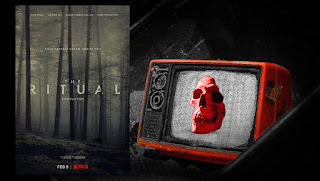 Happy October! And for us here at The DreamCage, that means only one thing, THE HALLOW-VENT CALENDAR IS BACK!! David Ames' choice for Day 1 is The Ritual...

I wanted to start out strong this year, and so I chose a movie that I had already seen but wanted to watch again. Few things can be as scary as the natural world. Sure, it is beautiful and relaxing to go to the woods and enjoy the scenery, but getting lost in those woods, or stranded in unknown terrain is a very real fear. Mix that with weird occult imagery and we have the first film in this year’s Hallow-vent Calendar: Netflix’s original film, The Ritual.

This film opens with a group of five friends out for drinks. As their night progresses, two of the group go into a liquor store to purchase more alcohol, and accidentally interrupt a robbery. While Luke (Rafe Spall) hides for his life, his friend Rob (Paul Reid) is confronted and ultimately hacked to death with a machete. The film then jumps six months into the future, where the remaining group members are taking a hiking trip to honor their friend’s memory. They are hiking the King’s Trail in northern Sweden.

Luke’s guilt over the death of his friend and his inability to act in time has had an immense effect on his life, one that will show up time and again, much like the scenes of Mal and the train in Inception. As the story progresses, one of the group, Dom (Sam Troughton) injures his knee severely and so the group decides to take a short cut into the woods in hopes of reaching their lodge destination earlier. As soon as they enter the woods, they are treated to a grisly sight: a gutted elk has been impaled high up in a tree.

The group pushes onward but are met with a torrential downpour, and the group stumbles upon an abandoned cabin, breaking in to seek shelter. Found inside are strange markings that they saw earlier carved into trees. They also come across a headless human torso, made out of wood, with antlers for hands. While the things they find are disturbing, they have little choice but to hide inside and wait for morning. Over the course of the evening, Luke is treated with nightmares about what has happened, awakening to find his chest punctured and bleeding. Other members of the group also encounter strange happenings, including Phil (Arsher Ali) bowing and chanting naked in front of the torso.

I don’t want to give any more away but suffice it to say that this film takes a strange occult twist including an amazing pseudo-druid cult in the woods, who worships the film’s monster. The fear is real and the tension is palpable. For a Netflix movie, this is one of the finer pieces of horror I’ve seen in recent years.

There aren’t really any downsides here. The music is haunting and miniscule until things really hit the fan. The performances are incredible across the board, with Rafe Spall really showcasing some acting chops. I can’t say enough kind words about the film, especially the ending which is so much along the lines of classic horror as to be borderline nostalgic. This film is also shot incredibly well - it is beautiful to look at, which helps to add to the already stellar storyline and performances.

One last thing I want to draw attention to is the amazing way in which the film jumps between Luke’s guilt-ridden nightmares and subconscious, and the real world. The film handles this seamlessly, and there are some great scenes where the film follows them into a liquor store in the middle of the woods, only to be ripped away and thrust right back into the Swedish forest.

If you haven’t given this a chance, do yourself a favor and sit back for an amazing film. You may be wary of Netflix Originals but I can tell you that if they are all in the same vein, quality-wise, as The Ritual, I will watch every single original gladly.

Find The Ritual on Netflix