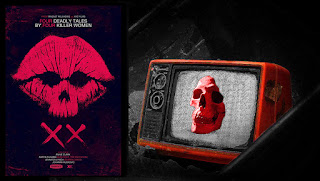 We love Halloween here at The DreamCage and we love the countdown to it even more as, every day in October, David Ames opens a window (well, writes an article) in his Hallow-vent Calendar of horror films. His choice for Day 12 of Hallow-vent is XX... 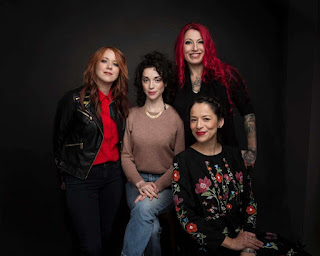 Today’s film is a little different from every other movie on the list this year; it is an anthology made up of four distinct horror shorts all directed by females, fitted together with an incredibly unnerving stop-motion piece directed by Sofia Carrillo. This framing piece follows a walking dollhouse searching for a bird to place inside an unconscious girl. If that sounds weird, you are correct, but it is also unnerving enough to tie these unconnected stories together well.

This short follows a family of four as a strange condition takes over the household, causing most of the members to cease eating. They are not sad or sick but have simply lost their appetite until it becomes too much and they die, one by one. This short was well shot and acted, and the tense moments and quiet elements truly add to the strange, subtle horror presented to the audience. Vuckovic has a talent for building the tension of a scene and that tension never relaxes until the credits roll on this first chapter. This is a great opening to the anthology, and it really sets the tone.

The next short is strangely funny and quirky. It was a nice break from all the tension of the first and a good preparation for the straight horror that is to come after. In this short, Mary is attempting to plan a birthday party for her daughter, Lucy, but when she finds her husband’s dead body she panics. Instead of calling the police, Mary hides the body in a panda suit she bought off a musician and then goes on with the party until, while trying to move the panda, the head falls off and reveals the body to the entire party. Hilarious, striking, and a little disturbing—this short was great.

This short is hands-down my favorite of the anthology. It follows two couples who are camping together. They discover an ancient cave painting that shows some sort of monster and as the night progresses, one of the women comes face to face with the creature who then murders her and wears her skin like a costume. The rest of the short is the skinwalker slaughtering the rest of the group. It is the goriest by far, and the practical effects on the body of the woman are great. It isn’t over the top and the monster imagery is great. This was a fun little monster movie and really is the best of the four.

Finishing out the anthology is a brilliant continuation of the classic horror film Rosemary’s Baby. The short opens with a woman talking to a doctor who tells her take her son and flee. Years later, Cora is dealing with some issues surrounding her rebellions son, Andy, who is turning 18 in a few days. She finds a crucified squirrel on a tree near their house, and has to deal confront the parent of a girl who claims that Andy had ripped her daughter’s fingernails off for fun. None of the adults, except for Cora, think that Andy should be punished because he is so helpful. When Cora discovers that Andy has been growing claws on his hands and feet, she embraces him, and tells him everything about his heritage while his true “father” appears to claim him. Christina Kirk does a wonderful job of channeling Mia Farrow. She is worried and scared and also strong, fighting back her fear to defend her one and only child. Kusama really does capture the vibe of Rosemary’s Baby, but goes further in some regards and adds a slight amount of gore, all while keeping the classy feel of the original film. This is a great ending to well-done anthology.

Overall, I understand the social implications and importance of this film. The four female directors do amazing work and each piece is a great addition, adding both individual style and substance to each chapter. This film is an achievement, and while I don’t think it accomplishes everything as well as other anthology films like Trick-r-Treat or Holidays, it is still so incredibly watchable and enjoyable. It’s an easy watch and worth the short runtime—each chapter is done well and so not only is it well-done, it is also consistent.