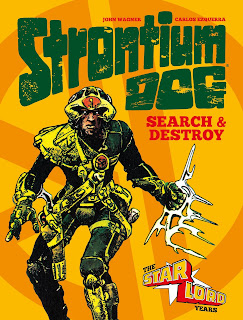 The earliest adventures of one of 2000 AD’s greatest characters - Strontium Dog - are to be reprinted in colour for the first time in decades...

Reprinted with its original colour pages, Strontium Dog: Search and Destroy is a sumptuous 144-page hardcover collecting the origins of John Wagner and Carlos Ezquerra’s hard-hitting story of prejudice and violence.

The 210 x 276mm book, retailing at £19.99, will hit shelves on 26th June next year with a new introduction by co-creator John Wagner and featuring gorgeous artwork by Ezquerra, along with Brendan McCarthy, and Ian Gibson.

Strontium Dog: Search and Destroy brings back into print one of the seminal series of British comics, a science fiction Western that merges everything from time travel to a trip to Hell itself. This new edition, with colour centre spreads lovingly restored, is a must for fans and collectors alike, putting these stories back to their rightful place as one of the key series in the annals of British comics.

Originally published in Starlord, 2000 AD’s sister comic, these early stories had a profound effect upon readers, including future film director Edgar Wright. After the comic merged with 2000 AD, Johnny Alpha quickly became a fan favourite character and Strontium Dog remains one of the most iconic strips in the history of British comics.

The series is set in a world where nuclear war has left two classes of people - the mutants and the Norms. The mutant, their bodies warped by Strontium 90 fallout, are a persecuted minority barred from public life and herded into ghettos. Their only option for employment is as ‘Strontium Dogs’, bounty hunters tracking down the scum of the galaxy for cold, hard cash. It’s a difficult and dangerous life where only the toughest can survive. But Johnny Alpha and his Viking partner, Wulf Sternhammer, are the toughest there is.

One of the most influential names in the British comics industry, John Wagner started his professional career in the 1960s, working for DC Thompson in Dundee. Sub-editing various titles including Romeo, Wagner went freelance in the early seventies, forming a writing partnership with Pat Mills. Soon after, Wagner then made the move down south, joining IPC’s staff, where he initially edited girls’ titles, Sandie and Princess Tina, before helping to develop Battle Picture Weekly. Appointed as editor to the ailing boys’ comic Valiant, Wagner had an instant impact, co-creating and writing the hard-hitting cop strip One-Eyed Jack. He is best known as the co-creator of both Judge Dredd and Strontium Dog for 2000 AD.

Carlos Ezquerra is one of the biggest names in British comics, his utterly unique style and designs inspiring generations of comics fans and creators. Originally from Zaragoza in Spain, Ezquerra began his career on Spanish romance titles before getting work for IPC in London, where he moved from romance onto war and action stories, working extensively on Battle Picture Weekly and Action on strips such as El Mestizo, Rat Pack and Major Eazy. As co-creator of Judge Dredd for 2000 AD, Ezquerra designed the classic original costume as well as visually conceptualising Mega-City One. He also co-created Strontium Dog and illustrated A.B.C. Warriors, Judge Anderson, Tharg the Mighty, Al’s Baby and Cursed Earth Koburn, amongst many others. Away from 2000 AD, Ezquerra illustrated Third World War for Crisis magazine, and regularly worked with Garth Ennis on Adventures in the Rifle Brigade, Bloody Mary, Just a Pilgrim, Condors, The Magnificent Kevin, and Preacher. He passed away in 2018.