Film - The Wizard of Oz 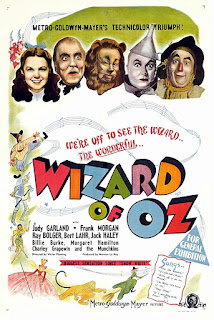 When we mentioned to Daniel White that the Wizard of Oz was getting a 4k blu-ray release later this month, we weren't quite prepared for the rant that followed.  We're Not In Kansas Anymore... Oh Wait, Yes We Are!..

I did used to like The Wizard of Oz, when I was a kid. However, now I've grown up, perhaps become more cynical or perhaps my taste in films has changed I have come to realise the horrible truth, The Wizard of Oz is terrible. Whatever the reason, I have grown to despise Dorothy and her obsession with red footwear. More than that though, there isn't a single element of the film that I regard as watchable and actually I think it's a really really poor film. You can't even tell me that Judy Garland's rendition of 'Somewhere Over The Rainbow' rescues the film because there have been much, much better versions sung. I think part of the film's attraction can be explained by the fact that it's one of "those films" that everyone has to love. Like the films of Woody Allen, if you dare to say that you don't like them then you get treated like a kind of cinematic leper. As if opinion and film taste wasn't entirely subjective and there is a list of films that we all have to like, no questions asked. My dislike, indeed hatred, of The Wizard of Oz has nothing to do with the central message of achievement through your own merit (you have the power within you, to quote Starlight Express) Although I have seen this message conveyed with far greater skill and much less need for trite and badly written songs and dubiously iffy dance routines.

The problem I have with The Wizard of Oz is focused around the characters and my connection with them. I have none whatsoever. I don't care about Dorothy and her misplaced panic over some lunatic wannabe witch that has taken against her dog Todo (spelt how she says it). I don't care about Aunty EMMMMMMM or Uncle Whats His Name and I certainly don't care about Thingummy Whats His Face and Plot Device who help run the farm. The only reason the scene exists is so that the audiences can wonder at the cleverness of the same actors playing Tin Face, StupidCrow and Lion, oh come on, it's a dream, like we couldn't work that out on our own. I find myself wondering what sort of Aunt and Uncle it is that allow Dorothy's dog to be taken by Miss Gulch (perhaps she's like Miss Deagle in Gremlins and owns half the town) rather than telling her to mind her own witchy nose. But it's important that Dorothy runs off to meet up with Professor Marvel so yet another horrifically clunky plot device is inflicted upon us. The sheer number of McGuffins within this film would allow you to set up your own McGuffin shop! Marvel wastes Dorothy's time with a load of pointless meanderyness but just so she can arrive too late to make it to the storm shelter and get knocked out! See what I mean? It is so clumsy and haphazard the characters only exist so that Dorothy can discover the real meaning of her life.

I will accept that the original score music for the tornado is quite impressive and the bit where Gulch turns into a witch is sort of OK. The move from black and white to technicolour does look striking but that's because we are seeing from black and white to colour. Show that with any scene and the adjustment is going to look impressive but Oz is so over the top and excessive the interest soon disappears faster than a water soaked Witch. The Munchkins aren't cute they are just plain annoying and that song! That song annoyed me from the first time my ears were infected with it. I don't care which league they represent it just shouldn't have ever been a thing. Glinda (supposed Good Witch) seems to have missed out most of her classes at Witch Valley High because her idea of good witching is waggling her wand around and flying by bubble. The Wicked Witches aren't much better, if you don't possess the foresight to remove yourself before a huge farm house drops on you then you deserve everything that happens next. Equally, if by some unfortunate circumstance, you are allergic to water (can you imagine the smell?) then why, WHY, WHY would you have a bucket of water anywhere near you??? The only spells we see from Her Wickedness is a couple of fire balls and a nifty piece of sky writing. In this day and age that sort of approach to spellmanship would get you turfed out of Hogwarts quicker than you can say LevioSA! No wonder she has to employ monkeys to do her dirty work but quite why there was a need for them to fly is another matter. Flying Monkeys are so out of place and they are in no way scary especially when they land and act like normal monkeys again. It's just silliness!

Scarecrow, Tin Man and The Cowardly Lion just annoy me intensely. Their stories of woe told at great length with the inevitable solution being to ask The Wizard (cue irritating song telling us where they are going, AGAIN) Why does The Lion get his own song and his horrible put on vibrato just makes me want to pull my own ears off. Not likeable, you don't care about their plight and I find myself quite pleased that The Wizard can't help them. I think Dorothy would be well within her rights to punch Glinda in the face for not telling her she could have gone home at any time by clicking her shoes together. But then she wouldn't have learnt that, after all, there is no place like home. Vomit!

I would contend that the only reason for liking this film is because well you have to like Wizard of Oz it's a classic isn't it? Well, no, no it's not. It needs to be consigned to the bin marked "derivative" along with The Sound Of Music. I don't care if it's always on at Christmas, I don't care that your kids love it. It doesn't make sense, the plot is non existent and the characters suck, so there!


If, unlike Daniel, you would actually LIKE to see The Wizard of Oz in 4k, it's released on 28th October.