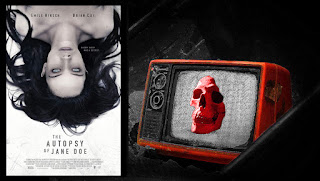 We love Halloween here at The DreamCage and we love the countdown to it even more as, every day in October, David Ames opens a window (well, writes an article) in his Hallow-vent Calendar of horror films. His choice for Day 13 of Hallow-vent is The Autopsy of Jane Doe...

I have heard about today’s film for a few years now. In fact, I bought the movie based on the cast alone, but I have never had the chance to really watch it. I talked to friends who have watched this and all of their opinions have been high so when I sat down, later than usual, to watch this movie tonight, I was anticipating something marvellous. Tonight, I watched the critically acclaimed, Stephen King-endorsed horror movie The Autopsy of Jane Doe.

This film follows to men, father Tommy Tilden, and his son Austin. They both work as country coroners, a business that has been in the family for generations. As the film opens, we see the minutiae of autopsy work, handled with all the nonchalance of a lazy Saturday afternoon for the duo. It is obvious that they have done this before, many times, and we are even given a glimpse into how the father educates his son on discovering the cause of death for their “patients.”

Austin’s girlfriend, Emma, shows up, waiting for him to finish so they can go on a date, but just as they are leaving, the sheriff shows up with a fresh body. This woman was found buried in the basement of a house which was the site of a brutal series of murders. The only thing the police can determine is that it appears the people were trying to escape when they were killed.

Austin, knowing that his father will need his help, stays behind and promises to meet Emma later that evening. As the autopsy begins, there are strange irregularities, all consistent with a body that has been dead only a few hours. As the procedure continues, more and more strange things are discovered: shattered joints at the wrists and ankles, severed tongue, blackened lungs and scar tissue over all major organs, even though the exterior is in perfect condition. A storm begins to rage outside and when the lights go out, we are given flashes of the other morgue fridge doors, all open and empty, where they were filled mere hours before. Stranger things ensue as the people who recently died begin to play havoc with the medical examiners, and they both struggle to discover the strange happenings surrounding the autopsy of this Jane Doe (see what I did there?).

This is all the plot you will get out of me for this film. Right away let me say that I genuinely enjoyed this film. The direction was great, and on a low budget, what the cast and crew were able to pull off was pretty impressive. The film builds in intensity and there is a great mix of psychological horror, body horror, gore, and a dash of monster movie for good measure. I can see why this film has been so widely regarded in horror circles.

Hirsch and Cox are both perfect in their roles. Brian Cox, as usual, delivers his lines with gusto and experience, producing a completely convincing father and coroner. Hirsch is great as the stalwart son, working to both impress and aid his father in their work. Their chemistry together as father and son breathes family and so the drama which ensues afterward is that much more effective.

The thrills and psychological digs are great but the film seems to fall apart in the third act, and the “big reveal” at the end is less terrifying and more of a groaner. By trying to tie this movie into a historical event, it loses the mystique and begins to devolve quickly, going from strange and unique to clichéd and stilted. Sadly, this film was great but only for about 75% of the runtime. I didn’t hate the ending, but after the successful buildup, it did come across as a bit of a letdown.

Overall this film is decent. I would most definitely recommend it to my friends and to any horror aficionados out there who want to watch something interesting, at least for a while. You aren’t going to find a worthwhile resolution, but the ride toward the end is something that you can definitely enjoy.

Find The Autopsy of Jane Doe on Amazon