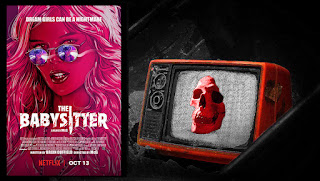 We love Halloween here at The DreamCage and we love the countdown to it even more as, every day in October, David Ames opens a window (well, writes an article) in his Hallow-vent Calendar of horror films. His choice for Day 14 of Hallow-vent is The Babysitter... 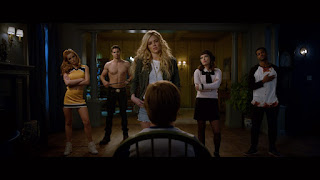 The time has finally come where I can abandon all other films and series except those made exclusively by Netflix. While our road so far hasn’t been terrible, I am extremely excited to push into the Netflix Original horror films because everything I have seen of them has been amazing, and all of the reviews seem stellar. So, to start off the foray into the streaming original world, I watched a film I have been excited about for at least two years. I have been a fan of McG’s work since Terminator: Salvation and We Are Marshall so when I heard that he was doing a horror film, I was stoked. That’s why, for tonight’s viewing, I finally sat down and watched 2017's horror-comedy The Babysitter.

The Babysitter follows 12-year-old Cole as he struggles to find a place where he feels comfortable. He is incessantly bullied and taunted, and is afraid of everything from people to spiders to driving. He only has one close friend, Melanie, and even she can’t help him to escape his tormented and sheltered life. The only person in his world who seems to truly understand him is his babysitter, the much older and incredibly attractive Bee. She even saves him from his bullies at one point.

When Cole’s parents take a weekend away together, Bee comes and stays with Cole. They enjoy their time immensely, watching movies, cooking food, dancing, and discussing their similar love of pop culture. It is pretty obvious that Cole is in love with Bee, and she seems to genuinely care for him as well. Melanie is convinced that when Bee stays the night, after Cole goes to sleep, she has her boyfriend over to have sex. Cole wants to know if this is true as well, and with encouragement from Melanie, he stays up to wait. Bee gives him a shot of alcohol to help him sleep, as long as he keeps it a secret, but Cole lies about drinking it in order to stay up late.

When he hears his doorbell ring, he sneaks around the corner, peering downstairs to see that Bee has invited her friends over. They are playing spin the bottle, and when Bee asks for a dare, she is dared to kiss everyone in the room. She does so, settling last on the dorky Samuel. As she kisses him deeply, she secretly draws two giant knives and stabs him in the head. As he bleeds to death, her friends grab two chalices and collect the blood. Bee gets a giant book and begins to talk about a deal with the devil where each of them will get whatever they want, as long as they can get some blood from an innocent upstairs.

I don’t want to give anymore away, but let me say at the outset that holy shit, this was a fun movie. This isn’t one of those artsy horror films like The Witch, Hereditary, or Midsommar. Instead, this is a nostalgic throwback to 80s horror and it is so incredibly satisfying. Even the imagery presented in the film, the pop-up text, the colors, the archetypal characters, all perfectly capture that classic horror feeling.

Lastly, and my personal favorite of the supporting cast, is Robbie Amell as the quarterback. He starts out just being a relative douche, but then randomly he is shirtless, something Cole keeps bringing up hilariously, and is so perfectly in sync with the jock stereotype. He chases and hunts and bullies, but also strangely inspires confidence in Cole. His portrayal is an obvious throwback to American Psycho’s Patrick Batemen, including the blood splatter, shirtless appearance, and general crazy eyes.

Samara Weaving is sexy and fierce as Bee. She expertly combines the strong, cult-leader qualities with the concern for Cole and his happiness. Her performance is really what sells the ridiculous premise of the movie. Judah Lewis is great as Cole. He is dorky and scared, but we get to watch him eventually embrace his adulthood and become a total badass, if still an incredibly awkward kid. He even gets the girl in the end, a total 80s cliché that comes across more as fun than as annoying.

I loved everything about this film. It is funny and it is FUN. After a week of very heavy and often overly pretentious horror films, The Babysitter was a much needed break. With tons of Easter eggs and references to classic horror, this film deserves to be watched and enjoyed. If Netflix originals continue to be as good as The Ritual and The Babysitter, the next few weeks are going to be very enjoyable.

Find The Babysitter on Netflix