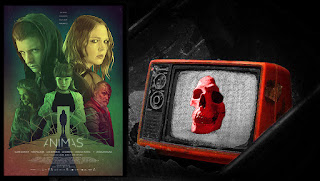 We love Halloween here at The DreamCage and we love the countdown to it even more as, every day in October, David Ames opens a window (well, writes an article) in his Hallow-vent Calendar of horror films. His choice for Day 21 of Hallow-vent is Ánimas...

Foreign language films used to be an immense barrier for me. While I have always been a quick reader, I used to think that by pulling my eyes away from what was happening on screen, I would be missing out on something incredibly important. As I got older, and also as I became a much bigger fan of both anime and film, I learned that sometimes the English dub is just awful. You lose so much in translation, so much nuance that you pick up when listening in the original language. If you don’t believe me, go watch Let the Right One In and see how much difference the original language makes. Today I dove into the first of many foreign language films this month: 2018’s Spanish horror-thriller Ánimas.

This film opens with a young boy sitting on the steps of an apartment complex. He is upset, trying to fix his broken yoyo, and we can hear his parents shouting at each other in the background. A young girl makes her way up the stairs, sits down next to him, and offers to help fix the toy. She also teaches him an exercise which helps him to be less afraid.

Fast-forward ten years later and Bram and Alex are best friends. Both loners at their high school, they are looking forward to graduation. While Alex has always been there for Bram, lately things have begun to shift and she is feeling more and more alone. Bram has taken an interest in a pretty young girl, Anchi, who is returning that interest, and although Alex plays it cool, it is obvious she takes the relationship personally.

We also see that no matter where Alex goes, she seems to be haunted by a strange silhouette of a woman. This image haunts her every time she is alone. Sadly, she has resorted to self-harm in hopes of feeling something, both with cutting and with scalding hot water, but her feelings never get resolved. She goes to Bram for some sort of comfort, but he is busy dealing with his own demons, namely his nearly catatonic mother and his verbally and physically abusive father. He can’t help her, but she continues to put in the time in hopes that eventually things will get better for both of them.

As the film progresses, we start to see that things aren’t right in the world. Can Alex survive the mental and physical demons she must face in order to help herself and her friend? Will she ever escape her feelings of loss and isolation?

These questions are all answered in the film, and so I won’t give anything more away. For the first foreign language film, I have to say I was rather impressed with Ánimas. It isn’t 100% positive as there are some issues with the pacing especially. It takes us about an hour into the film before any of the plot seems to solidify, but once we are rolling, the film delivers in a magnitude of ways.

For such a low budget, the filmmakers are able to achieve quite a lot. While the shots and in the intermittent CGI sequences are wonderful, the real joy comes in watching the way Alvea and Ortuno manipulate the lighting and color in each scene. While I have seen some critics argue that this is simply an homage to Suspiria, once I figured out what was going in the film the lighting feels much subtler. Each time the color shifts, the entire mood of the scene changes, and we are treated to this, not just in switching scenes like in Inception, but mid-scene and shot. The directors’ hands can be felt in every aspect of the film and I mean that in the most positive way.

While the cast is full of relative unknowns, the two newcomer leads are spectacular. Ivan Pellicer can portray both strength and struggle in a single look, and I think he could have a serious future, hopefully starring in bigger films, because he definitely deserves it. He is like a mix of Kyle Gallner and Kodi Smit-McPhee. Clare Durant is breathtaking in the film. She is not only beautiful, but she portrays damaged and desolate in a very realistic way, and does more for the portrayal of loss and depression than any half-hearted attempt in shows like the awful 13 Reasons Why. We believe her and so we root for her. It makes the journey to the ending that much more devastating, and Durant’s performance is the vehicle for all of our tension and worry.

If you are unsure about foreign films, this would be a great movie to try. The dialogue is minimal and the acting and production are topnotch. Not only is the story decent, the filmmaking elevates what would be considered slow and sluggish, to an interesting watch and a study of the human psyche. This film is far from perfect but damn, is it well-made and well-acted.