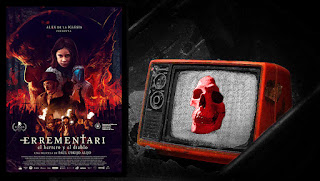 We love Halloween here at The DreamCage and we love the countdown to it even more as, every day in October, David Ames opens a window (well, writes an article) in his Hallow-vent Calendar of horror films. His choice for Day 24 of Hallow-vent is Errementari... 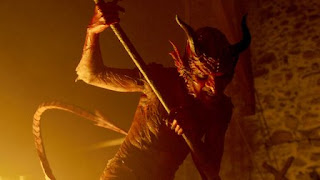 Sometimes you are incredibly excited for a film that you have heard about. You wait and wait, and eventually the day comes when that movie is released, and you can finally indulge in that long awaited pop culture experience. Other times you stumble across something that looks amazing, simply out of the blue. This has happened to me on numerous occasions. Today I was hoping for the same thing, and so, after noticing the images on Netflix of this film, I sat down excited to enjoy what appeared to be something wholly original. Today, we look at 2017’s Basque-language film, Errementari.

The film opens with an amazing monologue detailing how hell itself works, describing the circles and the suffering. Also, we are made aware of a man that even the devil himself feared. That man was a blacksmith, and so our story begins.

The film opens with a group of men preparing to be executed by firing squad. As the final man is prepared, there is a strange fog, and in that we see the silhouette of a demon brandishing a pitchfork. The final man, Paxti, is alluded to have sold his soul to the devil in order to survive and make it home to see his wife.

Eight years later the Blacksmith is feared by everyone in the nearby village. There are rumors about his bargain with the demon and the entire town looks to him as a cursed individual. Even the children use his house a source of fear and tales to frighten one another. There are even rumors that he murdered his wife, something the entire town seems to believe. One day an inspector for the government, Ortiz, shows up and demands to be taken to the Blacksmith shop. After some snooping, the town finds out that Ortiz is present to find gold that was stolen during the previous war.

Usue, a young orphan girl who is incessantly bullied by the other children and treated like trash by the adults, plays near the forge. One day, while she is near, men from the town, hired by Ortiz, try to storm the forge where Paxti lives, and are quickly chased off, but not before one man falls and is killed by a bear trap. When Usue enters the forge unseen to try and get back the doll that a local boy threw over the fence, she stumbles across a young boy who is being held captive in a cage. She frees the child who immediately transforms into the demon Sartael.

Paxti awakens and after a brief struggle is able to place the demon back in the cage. We find out that Paxti traded his soul to see his wife again, but when he arrived back at home, his wife had chosen another lover and bore a child. Paxti, in a rage, burned the child’s face and murdered her father. Because of this, his wife hanged herself, and it is revealed that Usue is that child.

I don’t want to give much more away, but I will say that even more demons appear and the film ends with an epic trip to hell, wherein people battle. Also, unlikely alliances are formed.

This film was an interesting one. I have never heard anyone speak Basque before, and I know nothing of the culture, so I feel some of this may have been wasted on me. Overall, the film is decent. It was hard, at first, to look past the terribly cheap-looking costumes and the over-the-top acting. Also, the CGI feels like it was created around 2003. That being said, the film itself is not bad.

I feel like the story was okay, and that with a proper touchup on the script, would have been pretty decent. What we get instead is a rambling, somewhat incoherent story which takes strange leaps, although once again, I could be missing something in the translation. I started out watching the film with the English dub but quickly switched back to the subtitles, which truly did help to make the film better.

I can’t talk too much about the performances because I wasn’t really impressed with anyone. They were all serviceable for their parts but no one really stood out. I will say that the prosthetics for the demons are spot on, and while the film may not have looked the best, the demon portrayals looked incredible. Those suits and the score were the real high points of the film.

In the end, I would recommend this to anyone who enjoys those old stories and myths from ancient cultures. This film feels as though it was trying to be too grand for the budget, but it shoots for the sky anyway, and even though it falls rather short, the end result is still rather enjoyable.