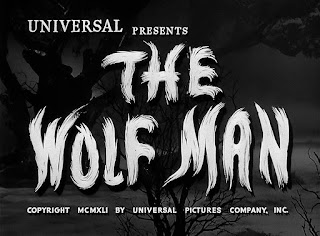 Daniel White dug through his vast horror film collection and is now rewatching a box set of classic monster movies from Universal. For his next Universal Monster of the Week, he looks back at The Wolfman...

Even a man who is pure in heart, and says his prayers by night;May become a wolf when the wolfbane blooms and the autumn moon is bright.

I remember the first time I saw The Wolfman, back when I was a teenager, and I remember how sorry I felt for poor Larry Talbot. Whereas modern werewolf films focus on the horror and the killing, this film dwelt more on the horror of dual existence and the titanic struggle to reconcile the two. I soon came to believe that Lon Chaney Jnr's portrayal in this and in Frankenstein Meets The Wolf Man was one of the most effective ever seen on screen. The inner turmoil as Talbot struggles to control his wolfish urges and, at the same time,  deal with the guilt of the murders he has committed engages with the audience like no other performance has ever done. It is etched into every line in his face and blazes across his eyes as he begins to realise that the only way out is by dying.

By the time The Wolfman was released, in 1941, Chaney was a huge Hollywood star and no stranger to horror films. He had portrayed Frankenstein in The Ghost of Frankenstein when Boris Karloff had decided not to play the part again. The hours Chaney endured in the makeup chair are also the stuff of legend and yet the end result on screen is still as astonishing today as it was back then. In my opinion the transformation sequences also stand the test of time and largely due to the painstaking efforts involved. Chaney's transformation took 10 hours to film, using time lapse filming, but onscreen it takes up no more than a few seconds. 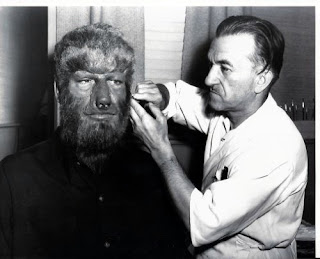 The Wolfman boasts an impressive support cast with Bela Lugosi portraying the wolfman who bites Talbot and the talented Ralph Bellamy playing Colonel Mountford. Readers of my review of The Invisible Man will remember that I went on a bit about Claude Rains (with good reason) and he is equally as engaging when playing a less villainous role as Sir John Talbot. The realisation that he has killed his own son at the end of the film is expertly portrayed by Rains and demonstrates the quality of actor he was. Once again The Wolfman has a tremendously eerie atmosphere and the story loses nothing with the passage of time. By focusing as much on the humanity of Talbot as well as his animal nature, the film portrays a monster that is much a victim as the poor unfortunate souls who fall victim to his blood lust.

Cinematic history is littered with examples of actors (some of them great actors) who failed to effectively portray duality onscreen. The finest example of this conflict of two very distinctive characters, inhabiting one body, must be Anthony Perkins in Psycho. He so effortlessly brought to life Norman Bates that the colour remake literally paled in comparison to its vastly superior black and white predecessor. Lon Chaney Junior portrays Talbot as a tortured victim unable to escape the furry wolfan shackles with which he has been bound. Only in death, ironically clubbed to death by his own silver handled walking stick, does he find the release he is so desperate to secure.