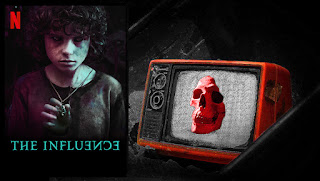 We love Halloween here at The DreamCage and we love the countdown to it even more as, every day in October, David Ames opens a window (well, writes an article) in his Hallow-vent Calendar of horror films. His choice for Day 28 of Hallow-vent is The Influence... 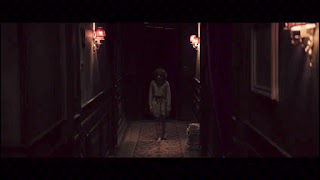 I am always reticent to review movies in a foreign language. Even if I watch the film in its original language, I am always afraid that I will miss something in translation that will make the movie that much better. Sometimes, in a foreign language film, you come across something that transcends language and can be both touching and terrifying regardless of the dialogue (Let the Right One In, I Saw the Devil). Other times, what you come across is something that may have a great idea but nothing can save the utter disappointment that results from a poorly written and scripted work, regardless of what language they are speaking or the culture they are representing. Unfortunately, today’s film falls into the latter category: 2019’s Spanish-language, haunted house/witch/something film The Influence.

The story opens as Alicia and her small family, husband Mikel and 10-year-old daughter Nora, move back into her childhood home to help care for her comatose mother, Victoria. Already living in the house is Alicia’s sister, Sara, and she proceeds to tell Alicia that they cannot move their mother because of a living will decreeing she must be kept at home. Also at the house for about six hours a day is Victoria’s hospice nurse, Ana. Alicia hasn’t been back to the house since she basically fled years earlier.

As the film progresses, very slowly, we are treated to strange flashbacks that fill in the abusive past that Sara, Alicia, and their other family members suffered at the hands of Victoria, a practising and evidently powerful witch. Over the course of their stay in the house, strange things begin to happen, and Nora begins to be “influenced” (see what I did there?) by her unconscious grandmother’s presence.

We find out, over the course of the film that Victoria was driven insane after the death of Alicia and Sara’s father, and she blames her children for that tragedy. She tortured them as children, forcing them to take part in strange rituals and abusing them both physically and psychologically. The memories begin to return to Alicia as the film progresses and the supernatural events increase in frequency until everything comes to a head.

This was the only film on the list this year that I almost didn’t make it through. I was happy at first, as the beginning of the film is interesting, and we get to see the family explore this crazy, witchcraft-laden home, but as the film (kind of) progresses, I was left wanting literally anything interesting to happen. If you start watching this film, I can guarantee that everything you think is going to happen will. There is not one event that isn’t easily foreseen, especially with unbelievably leading dialogue like, “Victoria is not going to wake up, Sara.” I wonder what will happen…

The performances were also very flat, almost across the board. Every single character is a two-dimensional archetype with no literal depth. Also, none of them are very likeable, and it gets to a point that I was almost rooting for Victoria, just because she was the most interesting person. The only caveat here is that Claudia Placer, the young girl who plays Nora, is actually pretty compelling. She and Victoria were the only elements that kept me from turning off the film.

The music is okay, but it is the same basic horror music you would find in any b-level horror flick of the same ilk. There is silence, followed by loud strings to show intensity. Thank God the music was there, because there was next to no intensity on the screen. Instead of depth of character, we are given a rip-off of Suspiria color schemes masquerading as “artistic choice.”

The one saving grace is that the sets look absolutely incredible. The house they live in is a wonder and each room says something about the film itself. The sets are by far the most impressive aspect of this cumbersome watch. The cinematography is leading and manipulative most of the time, but when the camera is exploring the space of the house it is incredibly successful.

In the end, you could easily skip this film and watch something else that utilizes the same basic ideas, but in a much more successful way—things like The Witch or especially Hereditary.

Find The Influence on Netflix