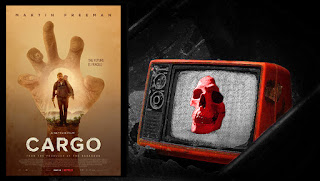 We love Halloween here at The DreamCage and we love the countdown to it even more as, every day in October, David Ames opens a window (well, writes an article) in his Hallow-vent Calendar of horror films. His choice for Day 27 of Hallow-vent is Cargo... 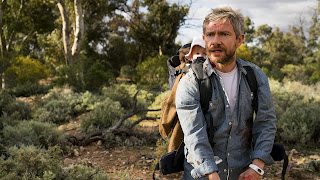 I think we can all agree that the zombie genre has kind of been done to death (pun intended). Ever since The Walking Dead premiered we have seen an explosion of content in the realm of zombies, and a lot of it has been terrible. Luckily we are occasionally gifted with something new or at least original in the realm of the overdone, and that has happened with today’s movie: the Australian film Cargo.

The film opens as a small family, Andy, Kay, and their baby daughter Rosie, are sailing down river in rural Australia. Although it isn’t apparent immediately, we soon discover that the world, or at least Australia, has been stricken by a virus that, you guessed it, transforms the victim into a zombie. While investigating a wrecked sailboat, Andy finds food but flees the wreck when he hears something in the sleeping cabin of the ship. He makes it back to his house boat and, when he lies down for a nap, his wife goes to investigate as well, and in the process is bitten by the undead.

Now on a time crunch, because once bitten people have only 48 hours before they transform, Andy and his family set off through the country in hopes of reaching the hospital. In the process, and after a severe car accident, Andy must kill his now transformed wife, who bites him in the process, and he sets out with his daughter strapped to his back in hopes of finding someone that can care for her. Along the way, he meets a cadre of people, all with different intentions.

He stumbles upon an older woman who helps to care for Andy as he transforms, and sets him in the direction to find a caregiver for his daughter. As his journey continues, he encounters the doomsday prepper Vic, who is eccentric, and later we find out, a sociopath. When Andy rescues a young aboriginal girl from Vic, he tries to make the journey to her tribe, the only group of people who seem to be surviving, in hopes of finding a group that will raise his daughter when he inevitably dies from the sickness.

This film is a wonderful addition to a genre that is grossly overdone. Not only is the story immersive and emotional, we are drawn in because there is this incredibly powerful relationship between a father and his daughter. The heart and soul of this film is that relationship, and it hearkens to other works of similar ilk, such as The Road or The Last of Us.

Setting the movie in the Australian countryside also adds an air of strangeness and distance that causes us to be more drawn in than the normal zombie work which is usually in a crowded, deadly city.

While all the performances are great, there are two that stand out. Simone Landers plays Thoomi, the aboriginal girl, with the strength and independence that the role really needs to be successful. She barely speaks, instead using her eyes and body to portray her mindset and character motivation. She is a wonder and have to think she has a bright future ahead of her.

The real star of the film is Martin Freeman (from The Hobbit and the Marvel Cinematic Universe). His performance is a tour de force of acting. He is soft and caring at times, showcasing his love and humanity in a world that has turned its back on those concepts. He is also intense when he needs to be, and we feel every emotion he does because of his skill as an actor. He is the crux of this film and without his brilliant performance, this would have fallen short of its success.

In the end, anyone who loves zombie films will enjoy this, because the success of the genre doesn’t focus on the undead creatures who torment the few remaining people. Instead, the genre thrives because we wish for the characters to make it through their own personal hells. We don’t care about the zombies, we care about the survivors. Because of this fact, Cargo becomes that much more impressive and effective.