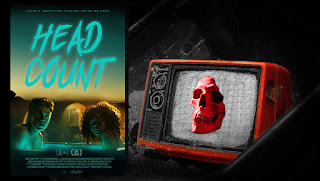 We love Halloween here at The DreamCage and we love the countdown to it even more as, every day in October, David Ames opens a window (well, writes an article) in his Hallow-vent Calendar of horror films. His choice for Day 5 of Hallow-vent is Head Count...

There are things in the world that people generally have a rational fear of: heights, spiders, snakes, etc. All of these things are natural fears built into our DNA to help us survive in a less than hospitable environment. There are also irrational fears such as the fear of groups of people, or of clowns. Among these fears, there lies a strange fear of the unknown, something inherent in all of us. We fear that which we don’t know or don’t understand a lot of the time, and we justify the unbelievable in order to assuage any of that irrational fear. Today’s movie deals with those types of justifications. Today, I watched Elle Callahan’s surprisingly unsettling Head Count.

Evan is on break from school and driving to the middle of the Joshua Tree desert to spend time with his hippie brother Peyton. From the onset we learn that their relationship isn’t the greatest. There is some distance that neither of them seem to understand or at least work to fix. Although Peyton has taken care of Evan since their parents’ death, the rift is palpable.

The brothers venture off into the desert and come across a group of nine college aged kids hanging out, smoking pot, and enjoying the desert themselves. When Evan sees a girl he obviously likes, Peyton encourages him to go with the group for the night and try to talk to the girl, Zoe. He does so and we are greeted with multiple scenes of drinking, smoking, and generally having a good, relaxing time at a house the group of friends is renting.

While sitting around a campfire, the group is telling scary stories. When it is Evan’s turn and he doesn’t know any, they encourage him to go to a website and find one. The first story is Hisji, which contains a small rhyme about the danger of saying the name five times, and about the curse that will befall the group as this demon enjoys things in groups of five. Supposedly the demon is a shapeshifter and will enact a suicide curse. The group plays off the short story as a bust and the party continues, but Evan and Zoe are certain they’re being watched while in the hot tub and so, the next morning, Evan explores. He finds random bootmarks as well as a strange charcoal drawing carved into the wall of an abandoned outbuilding on the property.

This is where things begin to take off and so I won’t ruin anything about the movie. Let me first say that I was thoroughly impressed with the film. The twists and turns and subtle, unnerving things that happen throughout the course of the last hour or so of the film are worth tuning into this unknown little gem. First, let us start with the weaknesses though.

The acting was serviceable. It wasn’t spectacular or mind-blowing, but in the same vein it wasn’t atrocious. I think the biggest part that suffers may be the writing. The kids all play their parts well, even though they all, except for Evan, are simply stock archetypal horror kids: there is the slutty girl, the jocky douche, the drugged out kid, the dork, and the innocent young girl. The rest of the group has little to no screen time or even character development and appear to be in the film, just so the number of couples can be five, the important number in the movie. The plot is loose at best, although for the purposes of this film, it doesn’t need to be rock solid. In all honesty, with the premise of this film, the imagery is far more important than anything else.

As to what this did well, the cinematography looks great. The camera movement does a great job of exploring the space and creating fluid motion between rooms, all while the director has hidden subtle hints that things are off. There are numerous moments where unsettling things will happen in the background, whether it is a random and unexpected suicide attempt, and doppelganger appearing out of nowhere and randomly replacing characters, only for the whole group to notice and then try to explain away what is happening. The shots and the colors are planned especially well so that nothing is missed or misused.

My favorite scene in the film has to be near the end when Evan returns to the house and there are weird, suicide-esque stations all throughout the house. In the context of the film, this scene is glorious. The other well-thought-out elements of the film all surround the number five and the various and multi-faceted ways in which the director works that into the mise en scene.

If you are looking for something fun and creepy but not necessarily gory, check out this film. It is not a Netflix original, but it looks fantastic and has some great imagery. Even though the ending left a lot to be desired, the film as a whole was well worth the watch. Go ahead and sit back, relax, and be sure to pay attention to the background of damn near every shot as there always seems to be something going on, just waiting to prey on that fear of the unknown.