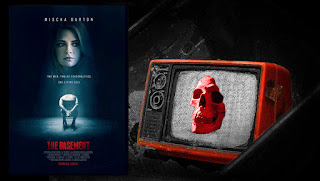 We love Halloween here at The DreamCage and we love the countdown to it even more as, every day in October, David Ames opens a window (well, writes an article) in his Hallow-vent Calendar of horror films. His choice for Day 8 of Hallow-vent is The Basement ... 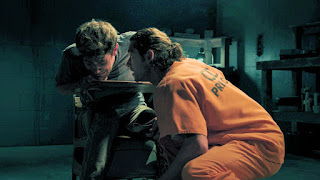 Sometimes there are movies that you see and you can’t help but wonder how they were able to accomplish so much on such a small budget. Usually those films are buoyed by incredible camera work and stellar acting. Today’s film sadly is lacking all of those things, as well as a decent story and anything resembling fear or terror. Today, we get supremely disappointed by 2017’s The Basement.

This film starts with famous guitarist Craig and his wife, Kelly, during a romantic evening at their home in the San Fernando Valley. When they run out of champagne, Craig goes to the convenience store to buy some more bubbly but before he can make it home, he is kidnapped. When he awakens, he is tied to a chair in a strange basement, and understands that the infamous serial killer “The Gemini” has taken him.

What follows is a series of weird encounters where the kidnapper continuously appears in different costumes, with different personalities, all to torture Craig. He appears as a clown, a beat cop, a detective, a convict, a doctor, and more, and every encounter is more and more torture, from knocking out teeth to severing fingers. Meanwhile, Kelly becomes frantic and begins searching the area for her husband. She even calls and enlists the help of her best friend, Bianca, but then things take a turn.

There isn’t really much to say about this film. It is atrocious. The camerawork and coloring are the only salvageable elements of this movie. It looks good, but that is where the positives end. The writing is pretty terrible, with the entire film taking place in one room, but not in a successful way like Room. Instead, you feel the budget in every shot. There is no story, other than for torturous purposes and the “deep” twists they try to achieve come across like they were written by one of my 9th graders for a creative writing course.

Long does his best to fumble through a near impossible script and he is the only one of the main three who seems to possess some modicum of acting ability. Barton is here, I can only guess, because of the need for a paycheck. She doesn’t really have to do anything but look pretty and she can handle that pretty well. She plays Kelly but we don’t feel anything like worry, even before the hilariously bad “twist” ending. Davis is so over the top that the intended fear of these multiple personalities we experience come across as humorous as opposed to shocking or frightening. It is almost like they were going for MacAvoy in Split but wound up with Tommy Wiseau from The Room.

In the end, there isn’t really one thing I can recommend about this film. Instead of a compelling story or a meaningful performance, we are given schlocky torture-porn with next to no purpose. Even the Saw and Hostel franchises have a story. The big reveal at the end is so hilariously bad and forced that I was almost mad about them trying to make it fit. This is one film I can’t really spin with a positive light. If there is one film on this list you should avoid, as of now, it is The Basement.

Find The Basement on Netflix