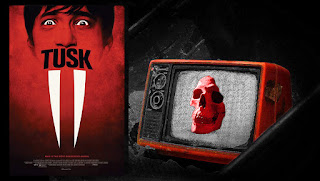 We love Halloween here at The DreamCage and we love the countdown to it even more as, every day in October, David Ames opens a window (well, writes an article) in his Hallow-vent Calendar of horror films. His choice for Day 9 of Hallow-vent is Tusk... 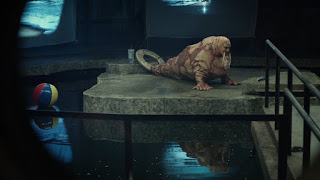 I just want to say up front that this review may come across as somewhat biased. I have been a lifelong fan of Kevin Smith—well since I was 12 at least, when I was first introduced to Dogma by my father. I loved his irreverent comedy as well as the heart that seemed to come through in all of his scripts and films. That’s why, when I heard that Kevin Smith had started to make more…serious…films, I was intrigued. I first saw Red State which, despite some people’s opinions, blew me away completely. Then I heard, through numerous podcasts of his (he has somewhat of an empire of which I am an avid listener) a hilarious take on a weird craigslist ad surrounding a strange request about a walrus. From this Smodcast episode, today’s film was born: 2014’s Tusk.

This film follows Wallace Bryton, a slimy and scumbag podcaster who is famous for mocking people on his show. When he travels to Canada to interview a kid who Wallace mocked for going viral for being a joke, he finds out that the kid committed suicide. Stuck in the great white north with no one left to interview, Wallace stumbles across a strange letter on a bulletin board offering free room and board and a lifetime of interesting stories. Wallace calls the man, Howard Howe, and sets up an interview that evening.

When Wallace arrives, he is already a bit spooked as the house is in the middle of nowhere and adorned with incredibly strange decorations. Throughout the evening, Wallace sits with Howard and enjoys a glass of tea while listening to his strange and incredibly interesting stories. One in particular details the time Howard was lost at sea but was saved by a “beautiful” walrus. As it begins to get late, Wallace notices that he is feeling woozy and eventually passes out. While unconscious, he remembers his girlfriend, Ally, begging him not to go, but he doesn’t listen.

When he wakes up, he is tied to a chair and his left leg has been amputated. From here, Howard only gets more and more insane. He lays out his plan for Wallace: he is going to construct a fully functional and realistic walrus costume and sew Wallace into it, completely recreating his savior. The ending is far more haunting and disturbing than I wish to reveal here, but know that at this point, we are only a third of the way into the film.

I LOVE this movie. It is funny and irreverent, the way that most Kevin Smith films are, but there is an added sense of weird that creates very real horror in the viewer. As Wallace’s transformation begins, you can’t help but feel uncomfortable and disgusted, in the best possible way. Smith has a real knack for delivering the “fucked up” in a way that is nigh impossible to turn off. You just have to know what happens next.

Performance-wise, all of the actors are strong. Justin Long is great as Wallace. He embodies the stereotypical American celebrity, course and inadvertently offensive, but still, with Long’s work, we can’t help but sympathize and empathize with him. Haley Joel Osment is great as Teddy, Wallace’s partner. He sells the immaturity necessary to become that role, but is convincing as the terrified friend in search of his lost buddy. Genesis Rodriguez does wonders in her role as Ally, especially in one scene where she talks directly into the camera about her suffering and sadness. As ridiculous as the premise is, she makes us believe and feel everything.

A surprise appearance by none other than Johnny Depp is welcome and hilarious. He plays the intrepid and incredibly Canadian detective Guy LaPointe. Hilarious and over-the-top, his role adds some levity to the scenes while maintaining the integrity of the film. Smith’s cohost on Hollywood Babble-On, Ralph Garman (or Frank Garman if you are a fan of the show), does wonders in his role as Detective Garmin, despite the miniscule part he plays. Everyone in the cast is wonderful, but they are all overshadowed by the true star of the film.

Michael Parks is a revelation in this movie. I have been a fan since the first time I saw him in From Dusk till Dawn, and was even more blown away in his role as the Fred Phelps-inspired preacher Abin Cooper in Smith’s Red State. That role should have garnered him an Oscar nod but sadly he did not receive that honor. He shows up here as the maniacal Howard Howe and is downright fucking terrifying. He goes from kind and attentive to insane man at the flip of a coin, and your skin will crawl when it happens. There is one scene in particular, where he simply mocks Long’s character at the dinner table. Wallace screams and, locking eyes with his victim, screams back. My hair was on end and I was witnessing an actor who was a master of his craft.

As much shit as Smith received for taking this strange new direction in his career, I am so glad that he did so. Tusk is the first film in a proposed trilogy, the True North Trilogy, which also includes the very fun, if not even more ridiculous Yoga Hosers (which I also loved), and the hopefully soon to come Moosejaws (which is evidently Jaws with a moose). I love you Kevin Smith, and I want you to continue to make movies just the way you are. Also, I love that you included the theme song for Hollywood Helpers as a ringtone—spectacular play!

People out there: If you haven’t given Tusk a chance, do yourself a favor and enjoy some seriously good body horror. The end scene haunted me for days. It was very reminiscent of the same feeling I get at the end of Candyman with that fucked up Stained Glass window. Tusk is worthy of a watch and I think that when more people start to take notice, it will eventually be revered as one of the more fucked up movies of the past 10 years.