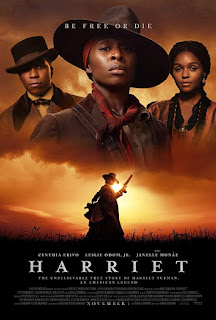 For a story so clearly cinematic, the remarkable life of Harriet Tubman has been a long time coming, but now, with the current fashion for bio-pics, her tale has finally been bought to the screen by director Kasi Lemmons in her feature Harriet.

Tubman, played by Cynthia Erivo, is a slave born as Araminta ‘Minty’ Ross. She is set to work at the Brodess plantation alongside her family, apart from her father who has been released. Araminta is married to a local free man John (Zackary Momoh) and they now wish to begin a family as free agents.

There was a promise, given by an ancestor of the present plantation owner, that she and her family would be given their freedom. When that stipulation is angrily refused by their current master, rebellion ferments in Araminta’s heart.

When the master dies suddenly she decides to run away but is pursued by the master’s cruel son Gideon (Joe Alwyn) who is strangely, yet persistently, obsessed with her. She initially runs to her father, Ben Ross (an endearing performance from Clarke Peters) who steers her towards the church of Reverend Green (Vondie Curtis-Hall) who can set her on the road to freedom.

The oddest thing about Araminta is that, after having incurred a serious blow to the head as a child, she is prone to spells of unconsciousness or catalepsy, during which she has ‘visions’. With a firm belief that these visions are her personal connection to the will of God, Araminta has absolute confidence in her decisions and becomes a figure of wonder to those around her.

Director Kasi Lemmons makes us party to ‘Minty’s visions, portraying them as a hazy, monochrome montage of random images – sparkling water, birds in flight, people, memories and snatches of intuition which gain importance further down the line. It adds a layer of wonder and spirituality in contrast to the grim, brutal and sometimes violent, grind of slavery.

We have a glimpse of that brutality, but much of it is demonstrated in the proprietorial language of entitlement and disdain from the white plantation owners rather than the graphic portrayal of the atrocities that the slaves had to endure. We are constantly aware of what has happened or might happen to them, and we see the scars inflicted by them by physical abuse, but director and co-writer Lemmons’ chooses only to allude to the cruelty suffered by the slaves and instead prefers to concentrate on the inspirational elements of her heroine’s character.

Spurred on by absolute faith in her visions, Minty manages to cross a hundred miles through harsh terrain and inclement weather, eventually making it to Philadelphia over the Pennsylvania border. 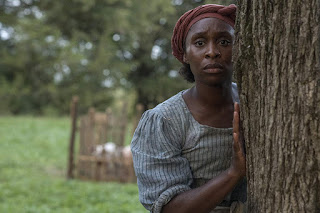 With the prospect of a fresh start, Minty is encouraged to take a new name. She chooses her mother’s name ‘Harriet’ coupled with her husband John’s surname, Tubman. However, after a year of freedom Harriet cannot settle, knowing that her family continue to toil under the yoke of slavery.

Ignoring the opposition of William Still (Leslie Odom Jr.) a free man who is a member of an organization that helps escaped slaves, and of her friend Marie Buchanon (a stunning Janelle Monáe), who owns and runs the Philadelphia boarding house where she lives, Harriet embarks on a plan to rescue her family, pointing out that those raised in freedom, having money and property, have little idea about what a life in bondage entails.

Although Harriet overcomes the many risks inherent in returning to the plantation, the rescue of her family isn’t quite as straightforward as she had hoped. Her husband John has a new life, and interestingly, some of her own relations have differing opinions about the idea of escape and freedom.

However, a taste of freedom has only made Harriet more determined to rescue as many of her people as she can. She becomes a major player for the ‘Underground Railroad’ - the secret group devoted to getting slaves out of the South.

The screenplay by Lemmons and Gregory Allen Howard outlines some of the countless precarious journeys Harriet undertakes - facing untold hazards and being relentlessly pursued by Gideon and his employee, the sadistic Bigger Long (Omar J. Dorsey) a black slave tracker only interested in his own reward and aided by a young mercenary called Walter (Henry Hunter Hall).

Harriet arranges a number of successful clandestine journeys down to the South, getting increasingly skilful each time. She assumes a disguise and gains the nickname of ‘Moses’ as she escapes with more slaves with each of her expeditions.

Ironically, her subterfuges are made all the more effective as the white plantation owners are simply unable to comprehend that a mere black woman might be responsible for stealing away their slaves and insist that ‘Moses’ must be a white abolitionist northerner in blackface disguise. They offer a reward of twelve thousand dollars for the capture of ‘Moses’ who they threaten to burn alive.

Harriet is a well-crafted and accomplished feature with a commanding central performance from Cynthia Erivo as Tubman, supported by a uniformly excellent ensemble cast. Erivo embodies Harriet’s indomitable and stubborn spirit, her religious fervour, her courage, resourcefulness and toughness, as well as her talent for guerrilla incursions.

Harriet Tubman was a simple black slave who escaped to become a refugee organizer, raid leader, intelligence gatherer, nurse, public speaker, feminist, fundraiser, and conductor on the Underground Railroad. During the Civil War, she worked for the Union army as a nurse, a cook, and a spy. In the feature Harriet her life of risk and adventure, a life beyond fiction, is finally brought to the screen for all to wonder at.