Book - The Manifestations Of Sherlock Holmes 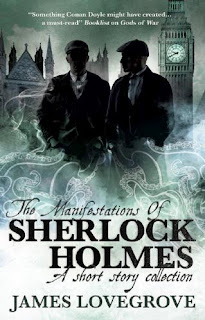 From the master of the genre comes twelve sensational tales about the world’s greatest detective as Titan Books announce the publication next month of The Manifestations Of Sherlock Holmes, A Short Story Collection by James Lovegrove...

Tales of treachery, intrigue and evil...

The iconic duo find themselves swiftly drawn into a series of puzzling and sinister events: an otherworldly stone whose touch inflicts fatal bleeding; a hellish potion unlocks a person’s devilish psyche; Holmes’s most hated rival detective tells his story; a fiendishly clever, almost undetectable method of revenge; Watson finally has his chance to shine; and many more – including a brand-new Cthulhu casebooks story.

James Lovegrove returns with a collection of some of his most popular and all new short stories about one of the world’s most popular detectives. A perennial fan-favourite author of original Sherlock fiction, in this collection Lovegrove has gathered together twelve page-turning tales that will delight Holmesians.

James Lovegrove is the New York Times bestselling author of The Age of Odin. He was short-listed for the Arthur C. Clarke Award in 1998 and for the John W. Campbell Memorial Award in 2004, and also reviews fiction for the Financial Times.

The Manifestations Of Sherlock Holmes, A Short Story Collection by James Lovegrove is published by Titan Books on 21st January 2020