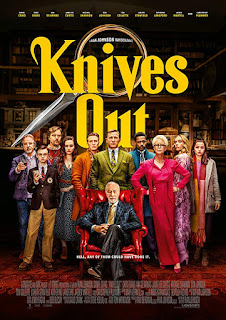 Whodunnit? Kraig Taylor-Bryant did as he writes about the latest film from Rian Johnson, Knives Out...

If you’re ever watching the kind of artsy style film where the film opens to two dogs running across a large back yard to a large expensive house, (which you’ll only realise to be important later on in the film), then you’ve likely walked into a film similar to that of the works of Rian Johnson. A director that some consider to be the “man who killed Star Wars” to clickbaiters of YouTube (of course I sincerely disagree), he’s a man whose work I too considered in my reasoning for watching Knives Out, a film credited as being written and directed by “the director of the Last Jedi”.

For those unaware, Knives Out tells the story of a rich family known as the Thrombeys. When successful novelist Harlan Thrombey (who is the main breadwinner of the household), is mysteriously discovered dead, police soon after determine cause of death to be suicide. Although Daniel Craig’s character of Detective Benoit Blanc suspects something more sinister at play with the Thrombey household, employing the family maid Marta Cabrera (Ana de Armas) to find out if anyone in the household would have a reason to kill Harlan Thrombey. The film will then immediately throw you off guard by showing you each of their potential motives

The fact that it was made by the writer/director of The Last Jedi was probably the reason I agreed to watch this film with my friend Alex. I watched the trailer for the film, with a fair amount of scepticism, not because I wasn’t a fan of the director’s work, but because I was just never a big “murder mysteries fan”. Although I always found them interesting, I could just never remember any of the names of the potential suspects. With Sherlock Holmes TV shows you had to pay attention to the name of the one witness you meet in the one scene, because that person will be mentioned constantly for the rest of the episode, I don’t think Knives Out was anything like that. 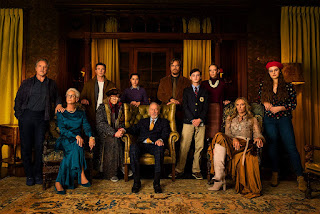 Knives Out lends itself well to how its characters have underlying traits to their defining personalities. From the get-go of watching this film you know what kind of people most members of the Thrombey family are, hearing how there is clearly tension between them, politically and otherwise. With arguments between them, and even a hatred of some, that’s intended to convince us that certain characters could have committed the murder.

From the start of the film you become convinced that the detective, Benoit Blanc, has already solved the mystery of who killed Harlan Thrombey, but then the film will try and convince you that he won’t solve it before the audience does, that is, if what the audience has figured out is true.

The film does the best job of keeping everyone’s attention by having every alibi of every character told in flashback, for the audience to see where everyone was at the time of the murder or at certain times before the murder. I think that definitely helped me in particular to pay attention, because I think it leaves the audience something extra to look at, which tends to help me follow an explanation (without being distracted about what’s going on in my own head).

The interesting thing about each character, is that Rian Johnson wants us as an audience to know when each character is lying, not so that we can figure out who the murderer is more easily, but so that we can learn what kind of people this family is, to a point where you can speculate that any/all of them could be the killer. Which helps to keep the over arcing plot as more mysterious, leaving us wondering who the killer might be. 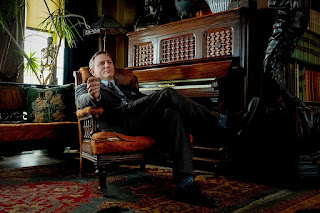 When it comes down to what sells the characters, (to the point where the audience might forget that they’re actors), it’s the actors that play them that really make the ‘family murder plot’ vibe sink into the audience’s brains. During the first scene with Daniel Craig, where he talks to each member of the family about their alibis, I couldn’t help but see him as just Daniel Craig putting on an accent, and then I got caught up in the madness and confusion, that’s intended to distract you from the real truth. It’s the point when you get so immersed in this story that you forget that these actors are ones you recognise from previous films.

For me, as well as Daniel Craig, it was Jaeden Martell (a child actor known for being the leader of the loser club in IT,) and Chris Evans. These are all actors from at least fairly large franchises and, coming into the film, I was concerned that their reputations as different characters would pre-define every characteristic of the characters that they play in this film and I can gladly say I was wrong on that front.

Chris Evans does an incredible job of making you think that he’s not Captain America (or Human Torch for those slightly older superhero film nerds), by being the complete opposite character. He plays the spoilt child so perfectly in this family in such a way that you can really relate to how he enjoys the chaos of his family when it ensues. I think he appeals to those of us that deep down feel intrigued by a family squabble that they’re not a part of, which is strangely why I felt a connection with him.

Jaeden Martell’s character is one of the characters you worry about because of what little you know about him from the start of the film. You pretty much learn that his views are very much like “Nazi views”, though we do learn this from another member of this lying family, so we can’t entirely trust their judgement. But my point being, in the moments when Martell’s character of “Jacob” speaks up, it’s what he has to say that thickens the plot, that gains the audience’s attention, more than the other films they remember this kid from.

If there’s one quote from the entire film that I could use to describe every character in this film, then “I suspect foul play” would be the most likely candidate. Mostly because no-one in this film is entirely good, at least that’s what I believe the film wants you to think. But it doesn’t stop us from maybe relating to any of them in some small way, such as the quirks that come with being a family so dependent on one man to finance their everyday lives, it’s hard not imagine anyone becoming dependent on that, if you live that lifestyle for long enough, and it’s interesting to look at the kind of characteristics that come through when someone is threatened financially.