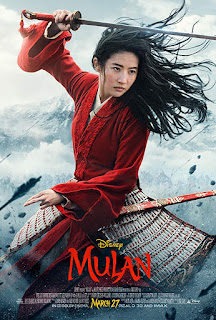 Forget about your Crouching Spider, Hidden Wardrobe [yes, we know, read Susan's review of that here - Ed] this is how you do historical epics. What? Me liking the look of something Disney does? Well, yes. Mostly because it's not too Disneyfied, being taken again directly from the poem “The Ballad of Mulan" rather than being a shot for shot remake of the animation. Also, before you ask, no, there's no Disney songfest and, sadly, it seems like there's also no comic-relief wise-cracking Mushu dragon for those of us waiting for an Eddie Murphy reprisal. What there is, though, is gorgeously sweeping cinematography, beautiful costumes, a stunning fully instrumental score by Harry Gregson-Williams (Shrek, The Chronicles of Narnia), an incredible cast and... a shape-shifting witch! Yep, I'm sold.

Here's what the synopsis says:

When the Emperor of China issues a decree that one man per family must serve in the Imperial Army to defend the country from Northern invaders, Hua Mulan, the eldest daughter of an honored warrior, steps in to take the place of her ailing father. Masquerading as a man, Hua Jun, she is tested every step of the way and must harness her inner-strength and embrace her true potential. It is an epic journey that will transform her into an honored warrior and earn her the respect of a grateful nation…and a proud father.

Oh, and that cast? How do Donnie Yen, Jason Scott Lee and Jet Li grab your attention as names? With Yifei Liu taking the lead as Mulan, the film is due out on March 27th.