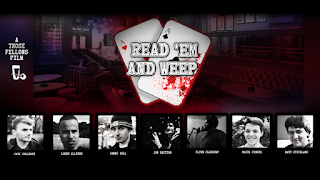 We love to champion new, young and upcoming film-makers so when we heard that one of our occasional reviewers, Jon Britton, was involved in making a short film, we wanted to let you know about their latest crowdfunder...

Read some of Jon's reviews for us here

A disgraced police detective struggles to cope with life after the death of his partner. In a bid to earn enough money to live out his dream of travelling he plays a hand of cards against a notorious mob boss and wins. As a result of his winnings, he becomes a target of the mob and is forced to fight for his life.

So far, so action movie, right? So how is this film going to be different? According to the Southampton based film makers, it's going to have a very gritty but particularly British feel to it and they felt that aspect was very important to them, saying they wanted "a distinct look to the film which will make it clear that the film is set in the UK, with it being filmed in Southampton in locations that will be familiar to viewers such as parks, high street back-alleys and an ol' English pub."

They have also given careful consideration to the action scenes in the film, saying that "It's no secret that knife crime has become a concern in the UK recently - more so than gun crime, so we are going to reflect on that in the film by crafting our action scenes around hand to hand combat rather than the explosive warehouse shootout seen in many action films. We feel that handheld weapon fights are more reflective of the British crime scene rather than a gunfight which, to us, is more of an American trope."

Add in the promise of slick neon-lit camerawork and a bespoke soundtrack of original electro-synth music, composed especially for the film, and it all sounds good fun doesn't it? Well, it will be if those fellows at Those Fellows Film can raise the money to make it.

Those Fellows are all students at Southampton University, so money is always hard to come by, but they have costed out what they need to produce the film and are now looking for people to support their vision by supporting their crowdfunder which is an "all or nothing" Kickstarter to cover their budget of £3,600; the "all or nothing" bit means that, if they don't hit target, they don't get any money at all but the more they raise above the target, the better the end film will turn out to be. The financial target may not sound like much but Those Fellows are used to working with low and micro-budgets and have recently won an award for best micro-short at the Screen Culture Film Festival.

So, now you want to support them, what do you get for your money? As well as being able to pre-order the completed short film in digital, DVD or Blu-ray formats, there's also signed merchandise, limited edition posters and T-shirts up for grabs. You can see your own name on the screen as special thanks for being a backer or you can even get an IMDb credit as an Executive Producer.

Read 'em and weep? No! Read 'em and back 'em because it's guys like these that are the future of your films. Jon Britton is the award winning cinematographer on the team and they already have some excellent demo footage for what they would like to achieve. Watch this...


Find out more and support the Read 'em and Weep Kickstarter here.