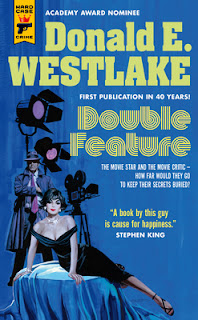 Steve Taylor-Bryant travels back in time as he gets another opportunity to read some more Donald E. Westlake courtesy of our friends at Hard Case Crime...

In New York City, a movie critic has just murdered his girlfriend—well, one of his girlfriends (not to be confused with his wife). Will the unlikely crime-solving partnership he forms with the investigating police detective keep him from the film noir ending he deserves?

On the opposite coast, movie star Dawn Devayne—the hottest It Girl in Hollywood—gets a visit from a Navy sailor who says he knew her when she was just ordinary Estelle Anlic of San Diego. Now she’s a big star who’s put her past behind her. But secrets have a way of not staying buried.

I love Hard Case Crime. I am getting some incredible fiction and, in most cases, it's almost forgotten fiction as some of these titles have spent decades out of print, lost to history. Of all the Hard Case Crime titles I have read it is Donald E. Westlake I tend to drift towards, as he is a writer I know from his screenplays for the likes of The Grifters and Payback, and, having enjoyed a couple of the reprinted titles of his that Hard Case Crime have published recently [read Steve's review of Brothers Keepers and Forever and a Death], I was very excited to receive a copy of Double Feature, a book containing not one but two Westlake stories, both different but both brilliant in their own way.

The first, and the longer of the two stories, is A Slight Case of Murder (itself a television movie starring William H. Macy back in 1999) is a slice of pulpy genius. A really well-crafted and humorous plot that plays out like an episode of Columbo but from the point of view of the perpetrator instead of the detective. It's all there, the crime committed, you are in no doubt who committed the crime and how he tried to cover it up, and the rest of the story is him leading the police on a merry dance, even befriending the lead detective and helping on other cases! It is, in the most part, excellent. There are a couple of parts describing somebody with what we consider a slur today which is disappointing, as I genuinely believe an editor could have reworded those couple of sentences for a modern audience, but aside from language “from another time” (I hate that excuse but can't think of a better way of wording it) the story is one of the best I have read from Hard Case Crime. It's executed so well, it's funny, it's smart, that ending is wonderful and this first story is worth the cover price alone.

The second story. Ordo (a French film from about 15 years ago that could do with a remake to garner a larger audience) is not a funny story. It is emotional and heart-breaking and sad but so hard to not read. It’s a tale of lost love and how fame can change a person, it is a story of how loneliness can destroy and how sometimes the past is the most painful memory you can relive. It was a stunning and powerful look at human relationships over time and just because it is sad doesn’t mean it isn’t wonderful.

Another Hard Case Crime book another success, they really are a publisher worth investing your time and money in if you like crime fiction and fancy something not as common or usual as most book shops offer.