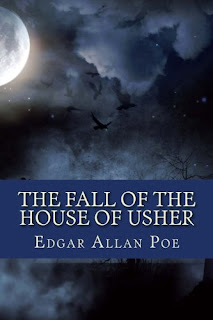 Tomorrow is the 211th birthday of Edgar Allan Poe. To celebrate, our own Gothic maestra Ren Zelen examines The Fall of the House of Usher...

In 19th century America the Gothic story emerged as a literary form through which the growing nation, barely sixty years old, could articulate its political, social and cultural interests and concerns. It was a form brought to public attention primarily by Edgar Allan Poe.

Poe was deeply influenced by the British Romantic Poets and his most famous work ‘The Raven’, is inspired by the poetry of John Keats. He succeeded in transposing many of the themes of early British Gothicism into the social life and anxieties of young America.

His well-known story ‘The Fall of the House of Usher’ (1839) deals with the decay of the old world, but it is also notorious for anticipating some of the psychoanalytic accounts of the subconscious that were to surface in the work of Sigmund Freud.

‘The Fall of the House of Usher’ begins with the arrival of the narrator at the family mansion of his boyhood friend - Roderick Usher – a man clearly suffering from many neuroses. The house is in typical Gothic style - it is grand, isolated, gloomy, crumbling and situated next to a black ‘tarn’ or lake. The upside-down reflection of the house in the tarn is commonly thought to symbolize the distorted thinking of the Ushers, and the bridge symbolizes the narrator who serves as their only connection to the outside world.

The very atmosphere surrounding the house is sick, it has “… no affinity with the air of heaven, but which had reeked up from the decayed trees, and the gray wall, and the silent tarn—a pestilent and mystic vapor, dull, sluggish, faintly discernible, and leaden-hued.”

The melancholy surroundings are matched by the mansion’s interior, which contains labyrinthine hallways, dusty, dark, claustrophobic rooms and a tomb in the basement. Roderick confesses a belief that the house possesses a mysterious consciousness of its own (a notion later used by Shirley Jackson in ‘The Haunting of Hill House’ and by Stephen King in ‘The Shining’). 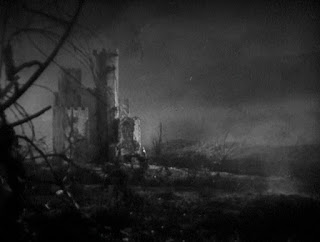 The deteriorating house is also an embodiment of the declining power of the Usher dynasty, and its malevolent influence suggests an aura of past misdeeds and transgressions that hang over the remaining heirs.

Roderick Usher and his twin sister, Madeline, are suffering from debilitating illnesses. Madeline appears to have a form of catalepsy, while Roderick explains his disorder as a "morbid acuteness of the senses." He can eat "only the most insipid food, wear only delicate garments," and he must avoid even the odour of flowers. His eyes, he says, are "tortured by even a faint light," and only the softest sounds from stringed instruments are endurable to him. The narrator suspects that these conditions may be the result of inbreeding within the family, practiced in order to preserve their rights to land and status.

Besides having a fascination for the weird and the spectral, Poe was also interested in the concept of the double, the schizophrenic and the inverse. He uses the Gothic motif of ‘doubling’ to represent Roderick’s damaged psyche. He is ‘doubled’ by his twin sister, with whom he shares “sympathies of a scarcely intelligible nature” and to a certain extent, they are ‘doubled’ by the house itself, which comes to represent their emotional state.

One day Roderick suddenly announces that Madeline has succumbed to her frailty and has died. He then enlists the narrator’s help in burying her coffin in the vault in the basement, which is tellingly located directly beneath his own bedroom.

Following the ‘burial’, Roderick becomes increasingly restless, erratic and distressed. He finally confesses that his sister was not actually dead, but merely cataleptic. Due to his abnormally acute hearing, he has been able to hear Madeline struggling with the chains in her coffin for several days, he having ostensibly buried her alive.

In a typically gothic scene set during a violently stormy night, Madeline’s emaciated, shrouded and bloodied figure escapes the vault. Deranged and distressed, in her final death agonies she clutches at her horrified brother. Roderick realises there is no escape, and his fragile physical and mental states finally cause him to collapse and die together with his ‘double’ – his sister.

As the last heirs to the house of Usher expire, the house itself begins to collapse, signifying the end of the ancient and corrupt dynasty. The narrator must flee for his life and he as turns back in terror he sees the “deep, dark tarn close sullenly and silently over the fragments of the House of Usher”.

His sister Madeline seems to represent a part of Roderick’s psyche that he is in conflict with, and which he tries to destroy. The return of Madeline signals the inevitable re-emergence of the repressed. The perverse act of ‘burial’ was a vain attempt to rid himself of part of his psyche that he cannot tolerate. 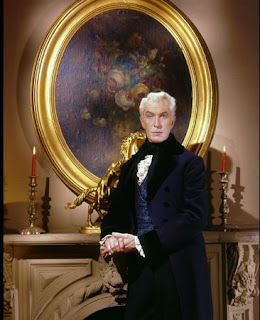 Central to this story is that fact that Roderick and the Lady Madeline are twins, this suggests that when he buries her, he hopes that death will somehow separate them. However, this act of division between the living and the dead merely culminates in the Fall of the House of Usher. When Roderick tries to rid himself of his twin half, he is, in effect, signing his own death warrant. (For a marvellously lurid, technicolour adaptation of Poe’s story, see Roger Corman’s film House of Usher (1960) - starring Vincent Price).

This story illustrates Poe’s personal belief that “the dead are not wholly dead to consciousness” a notion which indicates an aspect of wish-fulfilment. The sad demise of Poe’s mother during his infancy, along with the death of his young wife, inform and colour this fiction.

He provided an insight into the effect these deaths had upon his psyche in a line from one of his early writings: “I could not love except where Death was mingling his with Beauty's breath." In Poe’s mind, the ideas of beauty, love and death apparently became co-dependent.

Another dynamic is also evident – the grief or guilt that he felt when he could not bring his dead mother or young wife back from the grave. This is transposed into his stories as his women, suffering, dying, dead or buried alive – then return to haunt or wreak vengeance on his male protagonists by driving them to self-destruction.

Poe asserted that “the death of a beautiful woman is the most poetical topic in the world” but considering the gruesome ways in which the female characters suffer in Poe’s stories, literary critics have found the treatment of Poe’s women problematic and it’s not surprising he has been subject to accusations of misogyny. His female characters are often lacking in personality, merely lovely vessels presented in their most passive state – in extremis or in death.

However, it may be argued that the way Poe treats his female characters is a reflection of his own personality. He was notoriously asexual, his marriage and his other relationships with women, although emotionally ardent, remained ostensibly platonic.

Interestingly, in ‘The Fall of the House of Usher’ it is Roderick who seems to represent the weak, the delicate, the sensitive and the feminine. By contrast, Lady Madeline possesses a persistent and determined will to live. She is a potent force which survives being buried alive and is able, with supernatural strength, to force her way out of her entombment in the vaults and, despite being drained of blood and energy, her ferocity enables her to seek out her murderous brother and confront him.

Though the male protagonists in Poe’s stories attempt to silence female characters, their peers, or their own psyches, these attempts end in violence and futility – often resulting in the death of the oppressors after a descent into madness. Dead or not, Poe’s wronged characters inevitably fail to lie down and keep quiet – they return to torment their tormentors.

It is known that Poe had an unhealthy relationship with alcohol. It seems likely that this was a family trait, as his father (David Poe, Jr.) and brother (Henry Poe) were hardened drinkers. A proclivity towards alcoholism suggests a genetic predisposition, which is consistent with our modern understanding. Poe’s repeated and usually failed promises that he was “done with drinking forever” sound like the regular pledge of the alcoholic.

Another notion regarding Poe’s troubles with alcohol is the rumour that he experimented with laudanum and Absinthe, the bright green liqueur made from wormwood. Absinthe boasted a very high alcohol content and contained thujone, a chemical similar in nature to tetrahydrocannabinol (THC). In its early use it brought a state of hallucinogenic reverie and as such was favoured by artists and poets of the late 19th century, from Baudelaire to Oscar Wilde. Extended use however, brought dire consequences, including cases of insanity.

Something Freud would have found interesting is the fact that Poe sought inspiration from his dreams, and sometimes saw little difference between dreams and reality. The way Poe tried to expunge some of the more gruesome aspects of his reveries – violent deaths, mutilations, madness and premature burial - is by writing about these subjects in his early detective stories and macabre gothic tales, a method Freud would have encouraged, and which has left us with Poe’s legacy of uniquely weird and fevered tales.