CLASSIC DOCTOR WHO ON BRITBOX – The Sensorites 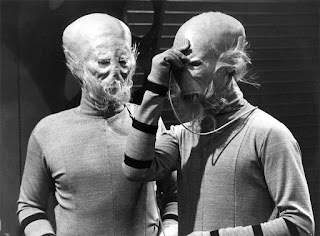 On 26th December 2019, 627 pieces of Classic Doctor Who content were made available to Britbox subscribers. Every Sunday in 2020, our Doctor Who expert, Tony Cross, looks back at some of the classic stories. Here is the First Doctor adventure The Sensorites…

I write this article about The Sensorites a couple of hours before I settle down to watch Hell Bent, which - as you'll know if you're reading this site - is the final episode of Series 9 of Doctor Who and I am reminded that Peter R Newman's script contains a little speech from Susan, when talking about her home, that 51 years later still influences our image of Gallifrey: "It's quite like Earth, but at night the sky is a burned orange, and the leaves on the trees are bright silver." I think it is the first description of what will eventually be called Gallifrey in the series.

One line in a pretty average Doctor Who story from 51 years ago that influences the look and design of Gallifrey to this day, which is a tribute not to the line itself but to the way Carole Ann Ford delivers it. Which is the first thing I want to say about The Sensorites. It gives Carole Ann Ford something to do beyond just behaving like a child. Susan is clearly struggling with her role here. The Doctor treats her like a child throughout. Indeed, he's as patronising as hell at points. And Susan puts up a fight against it. Here there are things for her to do. She has a telepathic ability that makes her useful for once. The Sensorites trust her because of it but all along the way Susan has to fight to be treated like an adult. The talk of her home and her line in the final episode about wanting to belong somewhere perhaps foreshadows her fate - or it would do if this was new Doctor Who. I would write more about this but Philip Sandifer in his interesting (and often pretentious) TARDIS Eridotorium does a fine job when he talks about 'The problem of Susan', which fundamentally is that at some point she's either got to grow up or leave. Read it. He's far better at explaining it than I am.

The Sensorites is a little slow. It suffers from having a wonderfully off beat and creepy first episode, ending with a lovely cliff-hanger and then dragging along mostly for the following five episodes. It doesn't help that a couple of plot points are daft - can Sensorites really not tell each other apart when they're not wearing their badges of office for example and how does the Sensorite get on the ship, remove the TARDIS lock and slide away without anyone noticing? In fact, not noticing stuff is a problem throughout. The most irritating being Barbara and Susan missing a really obvious sign with WATER written on it in order that they can go in the wrong direction and get into trouble. It's really stupid, especially as in The Aztecs Barbara was sharp as hell.

This whole story is a bit Barbara light actually as Jacqueline Hill slips off for a couple of week’s holidays, returning in episode six with a lovely suntan. It isn't that strong an episode for William Russell either who gets to be either tight-jawed impatient hero or ill.

Hartnell though gets some lovely stuff. I like it when the First Doctor gets to play scientist-detective aka Sherlock Holmes, like in this story. He's nicely belligerent, self-confident and grumpy to the Sensorites too. The Doctor's a bit obnoxious to Susan, as out-lined above, which seems at odds with the character he will become.

There's also a rather fine performance from Stephen Dartnell as John, the astronaut driven insane by - effectively - an overdose of telepathy. I found it genuinely affecting at points & it oddly reminded me of Simon Rouse's performance as Hindle in Kinda. He's the best of the guest performers. Lorne Cossette as Maitland is wooden and a bit lost, Ilona Rodgers isn't as wooden but still seems lost. They both seem to be suffering from that early 1960s British actor problem of not knowing or being able to adjust their acting from stage to small screen.

The Sensorites themselves are actually rather well-designed facially. They're obviously men in masks but they're good masks and you wouldn't have to do much with modern prosthetic to create a new series Sensorite that didn't look too dissimilar to these. Their dinner plate feet were a mistake though, especially when they over-lap each other. But they do feel like a race with a proper culture, even if occasionally they deliver clunking lines to each other to explain things. I give you "Are their hearts on the left or right side or in the centre like ours."

Fundamentally I didn't think this was a terrible story just a bit drawn out and occasionally a little silly. It isn't one I'll rush to re-watch I will admit but it does have its moments. And it is a rare chance for Susan to get a moment in the sun.