CLASSIC DOCTOR WHO ON BRITBOX – The Dalek Invasion of Earth 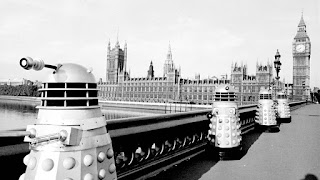 On 26th December 2019, 627 pieces of Classic Doctor Who content were made available to Britbox subscribers. Every Sunday in 2020, our Doctor Who expert, Tony Cross, looks back at some of the classic stories. Here is the First Doctor adventure The Dalek Invasion of Earth…

There are some great things in The Dalek Invasion of Earth but for me it isn't quite as good as other people seem to think it is. And, heresy upon heresy, I prefer the Peter Cushing film version.

I think there are two things that give this story a punch that makes you overlook its flaws. Firstly, the whole sequence of Barbara, Jenny (Ann Davies) and Dortmun (Alan Judd) escaping across a deserted London whilst dodging Dalek patrols has a real tension to it. The sight of Daleks lurking about London's tourist sites has a real impact. The Daleks have always been a metaphor for the Nazis - which is why Doctor Who could never do a proper World War Two story - and their gliding about the conquered London streets can't help but have that 'Britain conquered by Nazi Germany' vibe. [God, that was an ugly sentence. Forgive me. It got away from itself.]

I was going to compare it to 'It Happened Here', which was also made in 1964 so I'm not sure if it had any influence on this story. Perhaps it did.

The Daleks have marked various important sites with signs in that jagged Dalek alphabet as if they're are buses full of tourist Daleks floating about London taking selfies and wanting to try fish and chips.

The second thing that makes this story mythical is Susan's departure and the Doctor's speech. Thanks to An Adventure in Space and Time and The Five Doctors that speech has come to have a weight above and beyond its place in this story. I actually find myself getting a bit teary when it begins now, which I never did the first time I watched it.

Susan is the first major cast member to leave and her departure is hinted at throughout. She meets David Campbell (Peter Fraser), a resistance fighter and they fall in love. How much of this is 'real' love and how much is Susan's desire to find one place and time to settle down in is moot. I don't want to talk too much about Susan at this point as I'm going to write a separate blog on her as a character and deal with some of the issues that this story raises. Looking back my memory of Susan's story is that this desire to return home or to settle down comes up often. In David she's found that way out. Also, it points out the fact that Susan isn't a child anymore. She's becoming a woman, which might be problematic for the series going forward - which Philip Sandifer explores in fine theory in his TARDIS Eruditorum and he writes it better than me.

Those are the two things that I think help this story have a better reputation than I feel it deserves but there's a lot of things that don't work for me.

A lot of Richard Martin's studio direction is...careless. How much of this is the fault of having too small a studio to work in and how much of it is his fault I can't say but look at how badly blocked out the end of Part 3 and beginning of Part 4 are. The Robomen and their bomb come almost within touching distance of the Doctor, Susan and David whilst putting down their firebomb. It's impossible to tell whether the Doctor and Co. see or hear them until after the bomb is in place. And let's not even begin on the horribly badly written and directed disarming of said bomb. It's ridiculously stupid. Then there's the Doctor and Tyler (Bernard Kay) hiding in plain site as several Daleks glide past them the last of which is looking DIRECTLY AT THE DOCTOR.

I won't complain too much about the Slyther's appearance as this is 1964 not 2020 but its weird keening cry plays out over dialogue and seems to throw poor old William Russell a bit. Almost as if his director hadn't told him what to expect.

Actually, I've just remembered another positive: The Robomen. Yes, their headwear is clunky but there's something rather horrible about them. Their sort of zombies...actually they're kind of remote control Cybermen. In fact, there's something pleasingly bleak about various sequences, even as they are untidily directed. This does feel like a world that has fallen apart. People are dirty. The main cast get progressively dirtier and their clothes start falling apart, which I do like. I wish the series would remember that now.

Then there's the Dalek voices, which seem weirdly wrong and in one case it sounds like one of them is an utter idiot. It shouldn't annoy me, but it does, especially when they are talking to each other.

I should add that most of the acting is great in this. Hartnell is rather good, especially when he starts to spot what's going on between David and Susan (although we could have done without the 'smack bottom' line.) Jacqueline Hill, who is regularly the best of the regulars, gets some good stuff. Her attempt to bluff the Black Dalek in the final episode being a fantastic sequence. She also gets to bounce of the hardened, cynical and scared Jenny well. William Russell is his usual solid self. Carole Ann Ford gets to leave on a high, although there's still a bit too much screaming and flipping out for my liking.

In truth though whilst I enjoy this story - which I suppose is the main point of the thing - I can't quite see it as the brilliant story that (in my head) fandom seems to think it is. It has great moments but overall it is too long and too untidy to be brilliant.